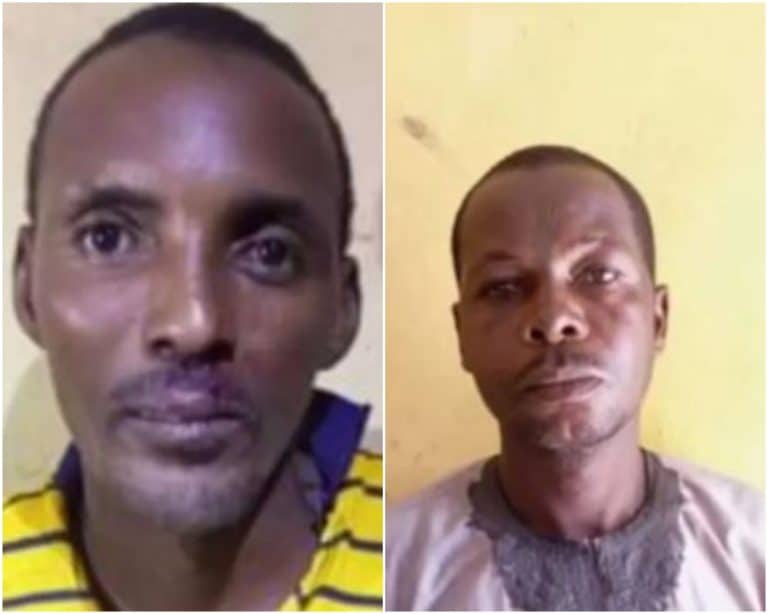 Mallam Bala, a leader of a notorious kidnapping gang and one Abdullahi Ruwa (a.k.a Juli), has been nabbed by the Police at Atako forest of Kuje area council, Abuja.

DSP Josephine Adeh, spokesperson of the FCT Police Command, in a statement on Friday, disclosed that the arrest followed intelligence which revealed the plan by the criminal group to kidnap a clergyman.

“Following efforts by the Federal Capital Territory (FCT) Police Command to ensure no hiding place for criminal elements in the FCT and generally improve public safety and security, the operatives of the anti – kidnapping unit of the Command, in a covert operation, today, 19th November, 2021, arrested one Mallam Bala and the gang leader of a notorious kidnapping gang, one Abdullahi Ruwa a.K.a Juli at Atako forest of kuje area council,” the PPRO stated.

“The suspects were arrested while perfecting plans toward executing the criminal act. The suspects equally revealed to the Police team how they have carried out several kidnap for ransom operations

“Two (2) mobile phones with special lines were recovered from Mallam Bala, which he used in communicating with other gang members while they perfected their plans. Two Gionee mobile phones which the gang uses in contacting the families of their victims for ransom were also recovered from Abdullahi Ruwa,” she added.

In another development, Police Operatives from Dawaki Division, got an intel which led to the arrest of one Awal Abdullahi, a suspected member of a kidnapping syndicate that has been on the watch list of the Police.

The suspect confessed to have participated in two kidnap operations carried out by his gang recently.

Further investigations led to the arrest of one Isah Yusuf and three (3) other members of the syndicate.

Efforts are being intensified to arrest other members of the gang in the two operations that are still at large, DSP Adeh said, adding that all the suspects will be charged to court upon conclusion of investigation.

“The Command urges residents to remain calm while reaffirming its unflinching commitment to rid the FCT of every form of crimes and criminality and protect the lives and property of residents. The command also implores residents to report all suspicious movements, emergencies or distresses through the following lines: 08032003913, 08061581938, 07057337653 and 08028940883.” the statement concluded.

Related Topics:Face Of Notorious Leader Of Kidnap Gang Nabbed In Abuja
Up Next

Man Arrested In Abia State For Selling His Baby N350,000 After Lying To Wife That He Died