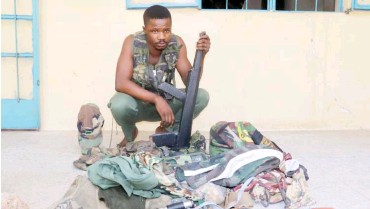 Police in Niger State have arrested a 24-year-old Emmanuel Dominic in Minna who impersonated as a military officer to secure the release of his friend in police custody.

Parading the suspect, the Command Public Relations Officer, DSP Wasiu Abiodun, said, “The suspect dressed in Nigerian Army camouflage, went to the police division and paraded himself as a soldier of the Nigerian Army with service no. 05313 attached to TRADOC, Minna, to secure the release of his friend in police custody.”

Abiodun said the suspect who lived in Tunga area of Minna was arrested by the police operatives from the Maitumbi division.

He said during interrogation, the suspect was discovered to be a fake soldier who later confessed to be a barrack boy of Army Barracks Minna, claiming that the uniform in his possession belonged to his late father whom he said was a soldier.

Abiodun said the suspects were arrested at Lapai-Gwari area along building materials market road, Minna, by a police patrol team.

He said during interrogation, four suspects arrested at the scene confessed to the crime and led the police to the buyer of the vanadalised electric cables.

Related Topics:Fake soldier arrested while bailing friend at police station
Up Next

Man Arrested In Abia State For Selling His Baby N350,000 After Lying To Wife That He Died