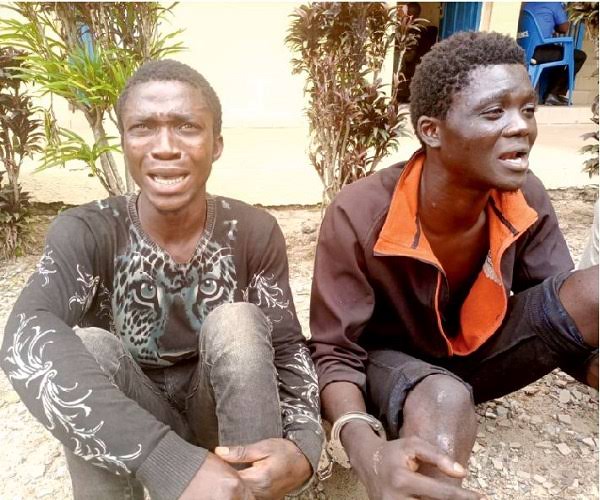 A 21-year-old native doctor, Sangokunle Akintola, who connived with his colleague named Ismaila Raheem, to rape a lady, has begged for forgiveness saying, “I only did one round within three minutes.”
Raheem, 22, had sought the help of Sangokunle to help him carry out the attack claiming his victim collected money from him and refused to have a relationship with him.

Tracknews Online gathered that on the night of October 27, 2021, the suspects invaded the house of Raheem’s victim (name withheld), around Kajola Area in the capital of Osun State.
When the duo arrived at the lady’s house, they met her in the company of her lover and threatened to kill them if they refused to cooperate with them. They took the lady out of her room and raped her by taking turns on her.

While parading the suspects at the Osun State Police Command, Osogbo, the Commissioner of Police, Olawale Olokode, told newsmen that Raheem and Sangokunle are cultists notable for terrorising the Oke-Baale area of the state.

He said, “They were arrested after the lady they raped reported them for having carnal knowledge of her and forcibly taking her phone using a fabricated gun.”

Confessing about the crime, Raheem said, “The lady we raped was a girl in my neighbourhood that I admired. She had been collecting money from me before telling me that I don’t belong to her class. She said she was dating people of higher class.”

Also, Sangokunle, who burst into tears begged for mercy while he was been paraded. He said, “I am a native doctor. I followed my colleague to rape the lady after he told me that she collected his money and refused to have a relationship with him. I only did one round with three minutes.”

Related Topics:Forgive MeI Only Raped Her For Three Minutes – Herbalist Begs
Up Next