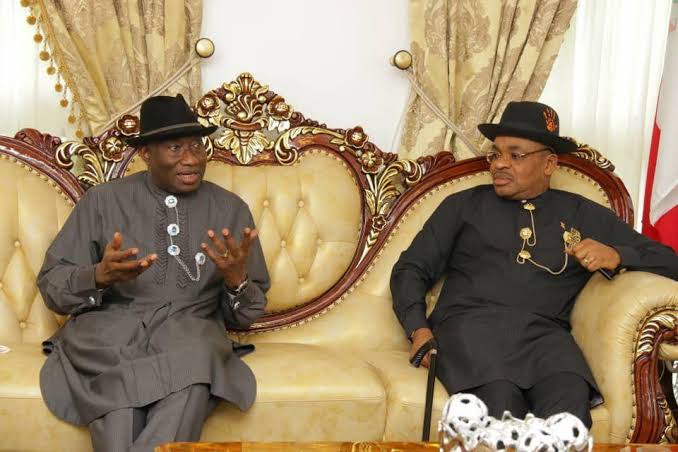 The Governor stated this on Thursday at Government House, Uyo, while speaking at a special luncheon in honour of the former President who was in the state for the annual conference of the Nigeria Environmental Society and the marriage ceremony of the first daughter of his long time friend and fellow pioneer student of the University of Port Harcourt, Professor Richard King.

According to Governor Emmanuel who was reflecting on the days of Goodluck Jonathan as President, Nigeria, in all indices, was better and expressed regrets that Nigerians have only come to realize what they have lost after his exit. This, he referred to as ‘medicine after death.’

“I made a speech the other day. You know I like talking data. I analyzed the growth, the GDP, the exchange rate, by the time I finished the analyses, it was so clear that we did much better and today everybody, every eyes have seen how the economy has been debased. That’s why I say we feel proud of you anywhere we go to”.

Welcoming the guests, Governor Emmanuel, expressed great pleasure on the visit of the former President, describing him as the pride of the country.

The governor also seized the opportunity to thank the former President and wife for identifying with him and his family during his father’s funeral, describing him as a great leader, a father and a brother.

Speaking earlier at the special luncheon upon his reception, former President Jonathan commended the pace of development in Akwa Ibom State under the leadership of Governor Udom Emmanuel. Jonathan who was accompanied by wife, Patience, described the governor as a brilliant, competent gentleman that deserves to be encouraged for greater roles.

He stressed that given his acquaintance with the progress of Akwa Ibom since 1994, he is in a good position to judge the development of the state.

In his words, “You’re a gentleman, very competent person, a brilliant young man that needs to be encouraged and I believe he will continue to grow”, he stated.

“From what we read and from what we see, you are doing very well. If you come into Akwa Ibom, you see a state that is growing. From 1994 when I was employed as the Assistant Director of Environmental Protection, OMPADEC, till I left office, there was almost no year I didn’t come to Akwa Ibom, so I can monitor the development of Akwa Ibom and I’m quite pleased with the way the state is going”.

He prayed for Governor Emmanuel to have a good successor who will follow his good steps and continue to lead the state towards greater heights.

Related Topics:Gov Emmanuel to Ex-President GEJ: Nigeria's economy was better under your watch
Up Next