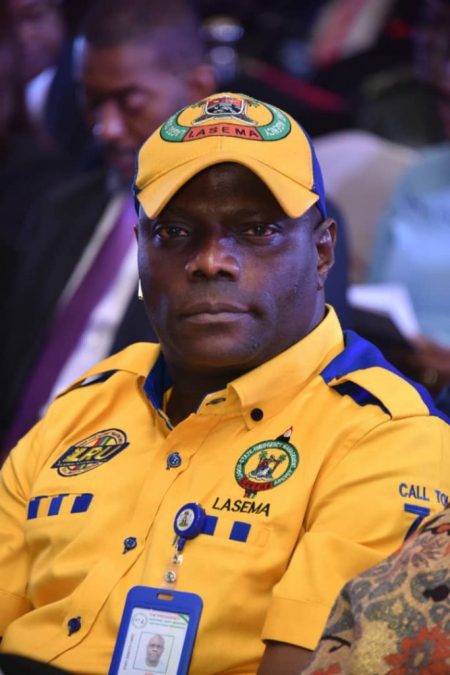 The group alleged that Oke-Osanyintolu singlehandedly and fraudulently engaged the services of faceless and incompetent contractors rather than known telecoms companies for a project.

The group alleged that Oke-Osanyintolu singlehandedly and fraudulently engaged the services of faceless and incompetent contractors rather than known telecoms companies for a project.

Also according to the group, Oke-Osanyintolu squandered and misappropriated the approved money for the said project.

It added that the project had been abandoned.

This was contained in a statement signed by the Executive Director of the group, Olufemi Lawson and made available to SaharaReporters on Friday.

The group had earlier petitioned the state governor, Babajide Sanwo-Olu, stating its demands.

According to the statement, the group urged Sanwo-Olu to immediately order an investigation into the activities of LASEMA under Oke-Osanyintolu, and ensure no act of corruption is buried.

The statement reads in part
“Our attention has been drawn to a series of corrupt and fraudulent practices of Dr. Femi Oke- Osanyintolu, the Director-General of Lagos State Emergency Agency LASEMA.

“Dr Osanyintolu, whom since appointment has been running the agency without transparency and accountability and has become a threat to the safety of Lagosians, through his activities, which are becoming inimical to the efficiency of the agency.

“As a classical example of the many corruption going on in the commission, Dr Osanyintolu has continued over time, to arbitrarily singlehandedly misappropriate funds meant to decommission the Lagos State Command & Control Centre, the nucleus of information & intelligence gathering pivotal to safety, security and emergency response in Lagos State.

“It could be recalled that there were complaints on the poor state of the Telecommunication equipment which adversely affected calls that are relayed via the emergency toll line 112/767 which are usually terminated before reaching the call centre for onward escalation to the control room for multi-agency coordination and response to calls.

“In a swift response, the Lagos State Governor, Babajide Sanwo-Olu visited and inspected the distressed Mast Housing Telecommunication equipment of telecom companies which supports and enables the functionality of the emergency toll-free line 112/767 used by the public to report security, safety and emergency disaster incident usually relayed to the command and control centre for immediate response.

“The governor subsequently ordered an immediate release of funds to LASEMA to work with relevant stakeholders and Telecom companies providers towards ensuring that the command and control center works effectively after the Ministry of Science & Technology, Ministry of Works, LASMIRA and LASEMA had jointly inspected the mast and certified that it was defective.

“Alas, it is demeaning to note that the Director-General of LASEMA refused to abide by the prescribed agreed steps that would ensure sustainability and workability of the project as unanimously agreed by all concerned stakeholders and Telecom companies involved in the project.

“Upon receipt of the fund, Dr Femi Oke-Osanyintolu singlehandedly and fraudulently engaged the services of faceless and incompetent contractors rather than the Telecoms companies to lay. He had since squandered and misappropriated the approved money while the project has met brick walls and was abandoned without meeting the set timeline.

“We, therefore, call on the Lagos State governor and the anti-corruption agencies, to immediately arrest and prosecute Dr Femi Oke-Osanyintolu and his kleptomaniac collaborators to ensure justice, restore sanity, let justice take its course and he should serve as a lesson to others as we jointly work towards egalitarianism.”

“We urge Governor Babajide Sanwo-Olu to order an immediate investigation into the activities of LASEMA under Osanyintolu, and ensure that no act of corruption, is buried under carpet,” the statement added.

The petition sent to Sanwo-Olu is titled “Petition against Dr. Femi-Osanyintolu, Director General of Lagos State Emergency Agency LASEMA Over unbridled corruption, destruction of coordination and call centre operations due to improper functioning of Telecommunications components of Lagos State command and control centre”.

In the petition, the group drew the attention of Lagos State Government and the various anti-corruption agencies to the alleged corruption and fraudulent practices being perpetrated at the LASEMA, under the leadership of Oke- Osanyintolu.

It said, “It should also be recalled that prior to the approval of funds for the above-mentioned project, the DG LASEMA wrote to the Ministry of Science and Technology concerning the defective state of the mast and the likely hazard it portends to the Command and Control Center Environs.

“Consequently, a Team of IT experts from Ministry of Science and Technology, LASMIRA, Ministry of Special Duties, Ministry of Works and LASEMA conducted joint assessment and inspection of the reported defective mast and certified that the Mast was defective, thus needed to be decommissioned and replaced with immediate effect.

“Thereafter, the IT team of LASEMA and Ministry of Science and Technology engaged Telecommunication Companies (9 Mobile, Airtel, Glo and MTN) on how best to carry out the dismantling of the Mast without disrupting the 112/767 Services, since the mast houses the Telecommunication equipment.”

“It is sad to inform Your Excellency, that the DG LASEMA, Dr. Femi Oke-Osanyintolu did not abide by the prescribed agreed steps that would ensure sustainability and workability of the project as unanimously agreed by all concerned stakeholders involved in the Project.

Related Topics:Group Calls For Immediate ArrestOke-Osanyintolu Over Alleged CorruptionProsecution Of Lagos Emergency Agency Boss
Up Next

How Governor’s aides attacked me in Gombe, by Goje