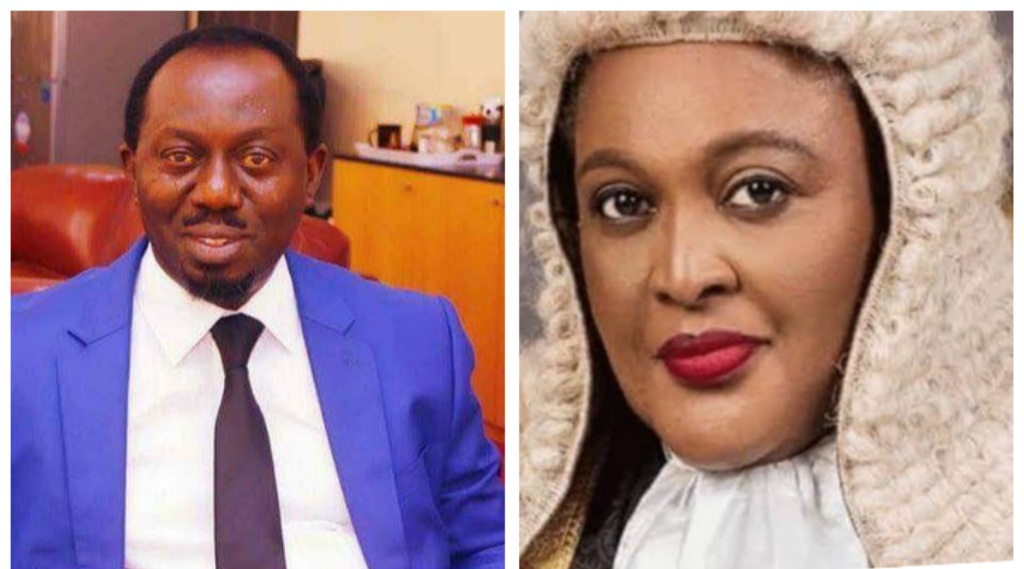 Passionate Appeal For President Buhari’s Intervention
Tracknews.ng gathered that Justice Mary Ukaego Peter-Odili prepares to bow out of the Supreme Court bench in May, 2022 and the National Judicial Council (NJC) has consistently failed or refused to initiate disciplinary proceedings against the apex court Judge for violation of the Code of Conduct for Judicial Officers in Nigeria.

Tracknews.ng reports the following Proceedings
 The NJC’s failure or refusal to perform its statutory responsibility of discipline of erring Judicial Officers with particular regard to Justice Mary Peter-Odili has given the Muhammadu Buhari Administration a bad image.

 The Buhari Administration came to power in 2015 and 2019 with a promise to Nigerians to: a. Fix the Nigerian economy;

 Fight corruption in all facets of Nigerian politics and economy, including the Judiciary; and finally, c. Tackle insecurity

 With less than 600 days to the end of the Buhari Administration, it will be a great disservice to the Nigerian people if the Administration failed or refused to intervene in the matter of JUDICIAL CORRUPTION INVOLVING JUSTICE MARY UKAEGO PETER-ODILI.

 DIVERSIONARY TACTIC: The October 29, 2021 invasion of the Abuja residence of Justice Mary Peter-Odili is, at best, a carefully orchestrated diversionary tactic to keep Nigerians and the NJC from scrutinizing the corrupt judicial record of Justice Odili. Suddenly, the entire nation and the media are in sympathy with Justice Mary Odili, barely six months to her disengagement from service. Wake up, Nigeria! The Federal Government and the media should lift the veil and look beyond the invasion. There’s more to it than meet the eyes.

 CRUX OF THE MATTER:

Justice Mary Peter-Odili abused her position as a Judge of the apex court in the country when she simultaneously became the Complainant, the Prosecutor and the Judge in Criminal Appeal No: SC 250/2010 (TIMIPA OKPONIPERE Vs. STATE) which came before the Supreme Court in 2013.

 This unprecedented judicial misconduct is capable of seeing her being dismissed from the Supreme Court bench. In the over 60 years history of the modern Supreme Court of Nigeria, not a single Justice of the revered apex court in the country, apart from Justice Mary Peter-Odili, has been so dragged before the NJC for such an unbefitting judicial conduct.

 The legal principle/maxim of NEMO JEDEX IN CAUSA SUA (one cannot be a Judge in his own cause) is an elementary principle 3 of Law. For a Supreme Court Judge of Mary Peter-Odili’s calibre – she rose through the ranks from the Magistracy – to fall foul to such an elementary principle, explains her shallow knowledge of Law but deep involvement in judicial corruption.

 GENESIS OF THE MATTER:

Tracknews.ng gathered that On January 12, 2007 the Rivers State Government filed an 8 counts Information/Charge known as CHARGE NO: PHC/30CR/2007 (STATE Vs. TIMIPA OKPONIPERE) at a Rivers State High Court sitting at Port Harcourt against TIMIPA JENKINS OKPONIPERE, Port Harcourt lawyer and human rights activist, upon a criminal complaint by the then Governor of the State, His Excellency, Sir (Dr) Peter Odili. Certified true copy of the 8 counts Information/Charge is attached herewith.

 All of the 8 counts of the Information/Charge were directly linked or connected with the person of Dr. Peter Odili and his failed 2007 presidential bid. So, under his watch as Governor of Rivers State, vigorous prosecution of the matter commenced before Justice Biobele Georgewill (now of the Court of Appeal).
 Dr. Peter Odili thus became the Complainant and the Prosecutor in the matter while Mr. Okponipere, being a Legal Practitioner, defended himself in person.

 By means of an Interlocutory Appeal, the matter progressed from the Rivers State High Court to the Court of Appeal (Port Harcourt division) and eventually, to the Supreme Court in Abuja as Criminal Appeal No: SC 250/2010 (TIMIPA OKPONIPERE Vs. STATE). 13. At about the same period, Justice Mary Peter-Odili, wife to Dr. Peter Odili (the Complainant and Prosecutor), had also been newly elevated to the Supreme Court bench.

 By virtue of her status as wife to Dr. Peter Odili (the Complainant and Prosecutor), Justice Mary Peter-Odili ought to have recused herself from hearing and delivering Judgment in Criminal Appeal No: SC 250/2010 (TIMIPA OKPONIPERE Vs. STATE) when the matter progressed to the Supreme Court.

However, against all known canons of natural justice, equity and good conscience, Justice Mary Peter-Odili shamelessly and brazenly sat on the 5-man panel of Justices of the Supreme Court of Nigeria which heard and delivered Judgment in a Criminal Appeal where her husband, Dr. Peter Odili, was the Complainant and the Prosecutor. Automatically therefore, she simultaneously became the Complainant, the Prosecutor and the Judge, in her own cause. This was a clear and manifest abuse of judicial privilege. 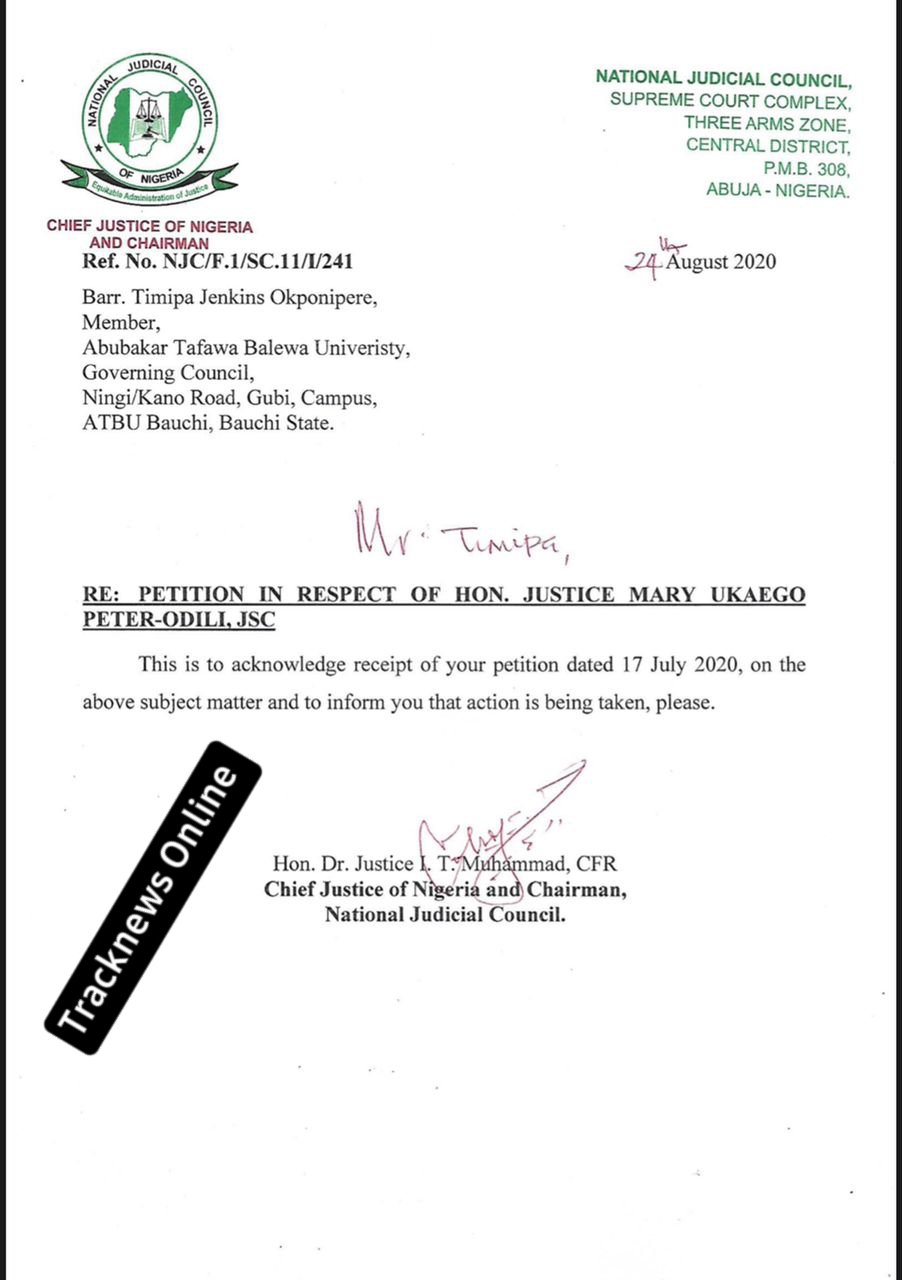  MR. OKPONIPERE PETITIONS NJC: In a petition on oath filed at the Federal High Court in Abuja on July 17, 2020 (over a year ago!) and submitted same day to the office of the Chief Justice of Nigeria & Chairman of the NJC, Mr. Okponipere urged the NJC to take disciplinary action against Justice Mary Peter-Odili for gross violation of Rules 8 and 12 of the Code of Conduct for Judicial Officers in Nigeria. Copy of Mr. Okponipere’s petition to the NJC is attached herewith.

 Rule 8.1 of the Code of Conduct for Judicial Officers in Nigeria states thus: “A Judge shall not allow the Judge’s family, social or political relationships improperly to influence the Judge’s judicial conduct and judgment as a Judge.”

 Rule 8.3 of the Code imposes a duty on Judicial Officers to avoid pursuing self-interest. It states: “A Judge who takes advantage of the judicial office for personal gain by his or her relative or relation abuses power. A Judge must avoid all activity that suggests that his or her decisions are affected by self-interest or favoritism, since such abuse of power profoundly violates the public’s trust in the judiciary.”

 Rule 12 of the Code makes provision for “Disqualification”. Justice Mary Peter-Odili is particularly liable under this Rule. Among others, Rule 12.1 states: “A Judge should disqualify himself in a proceeding in which his impartiality may genuinely and reasonably be questioned, including but not limited to the instances where: (a) he has a personal bias or prejudice concerning a party or personal knowledge of facts in dispute; (c) he knows that he individually or as a Judicial Officer or his spouse or child; has a financial or any other interest that could be substantially affected by the outcome of the proceeding.”
NJC’S GRAND DESIGN TO COVER-UP THE MATTER: In a letter with Reference No. NJC/F.1/SC.11/I/241 dated 24th August, 2020 the Honourable Dr. Justice I. T. Muhammad, CFR Chief Justice of Nigeria and Chairman, National Judicial Council acknowledged receipt of Mr. Okponipere’s petition and assured him that action was being taken. Copy of the letter is attached herewith.
 However, more than a year after, no action has been taken against Justice Mary Peter-Odili. There seems to be a grand design by the NJC to sweep Mr. Okponipere’s legitimate petition under the carpet. Once Justice Mary Peter-Odili retires from the Supreme Court bench in May, 2022 the petition shall naturally become worthless.

 HOW THE ODILI’S ARE BLACKMAILING THE FEDERAL GOVERNMENT:

The October 29, 2021 invasion of the Abuja residence of Justice Mary Peter-Odili (as pointed out earlier), is not sufficient reason to overlook her judicial misconduct. The media is particularly naïve in this respect. Since news of the invasion broke, the media have whipped up public sentiment in her favour and have refused to publish or entertain any “negative” story about Justice Odili.

 Indeed, all of Mr. Okponipere’s attempts at getting the media to publish and enlighten Nigerians about Justice Odili’s judicial misconduct and how the NJC have tacitly protected Justice Odili have been unsuccessful.

 So far, the media have not disappointed the Odili’s as the strategy to keep Nigerians, including the Nigerian Bar Association (NBA), civil society groups such as SERAP (SocioEconomic Rights and Accountability Project who have petitioned the United Nations over the invasion) and the Federal Government focused on the invasion until Justice Mary Peter-Odili retires from the Supreme Court bench in May, 2022 have largely been successful.

 As a matter of fact, the Peter-Odilis have succeeded in using the October 29, 2021 invasion of their Abuja residence to sustain a tempo of blackmail against the Federal Government.

 THE TIME TO ACT IS NOW! No responsible Government would sit idly and watch its Supreme Court being denigrated and ridiculed by the controversial actions of one of the Justices of the same Honourable Court. 28. PASSIONATE APPEAL TO PRESIDENT BUHARI: Accordingly, I call on President Muhammadu Buhari, Africa’s Champion of Anti-Corruption, to rescue the situation. Justice Mary Ukaego Peter-Odili deserves nothing but DISMISSAL from the Supreme Court of Nigeria.

 The NBA should be made to call on Justice Mary Peter-Odili to submit herself to the disciplinary jurisdiction of the NJC.

 The NJC should redeem its image by standing up to its responsibility. Firm and decisive disciplinary action should be taken against Justice Mary Odili, without delay.

 Finally, the media should jettison all forms of gullibility and display courage and bravery in the overall interest of preserving the integrity and dignity of the Judiciary in the country. Yours faithfully, 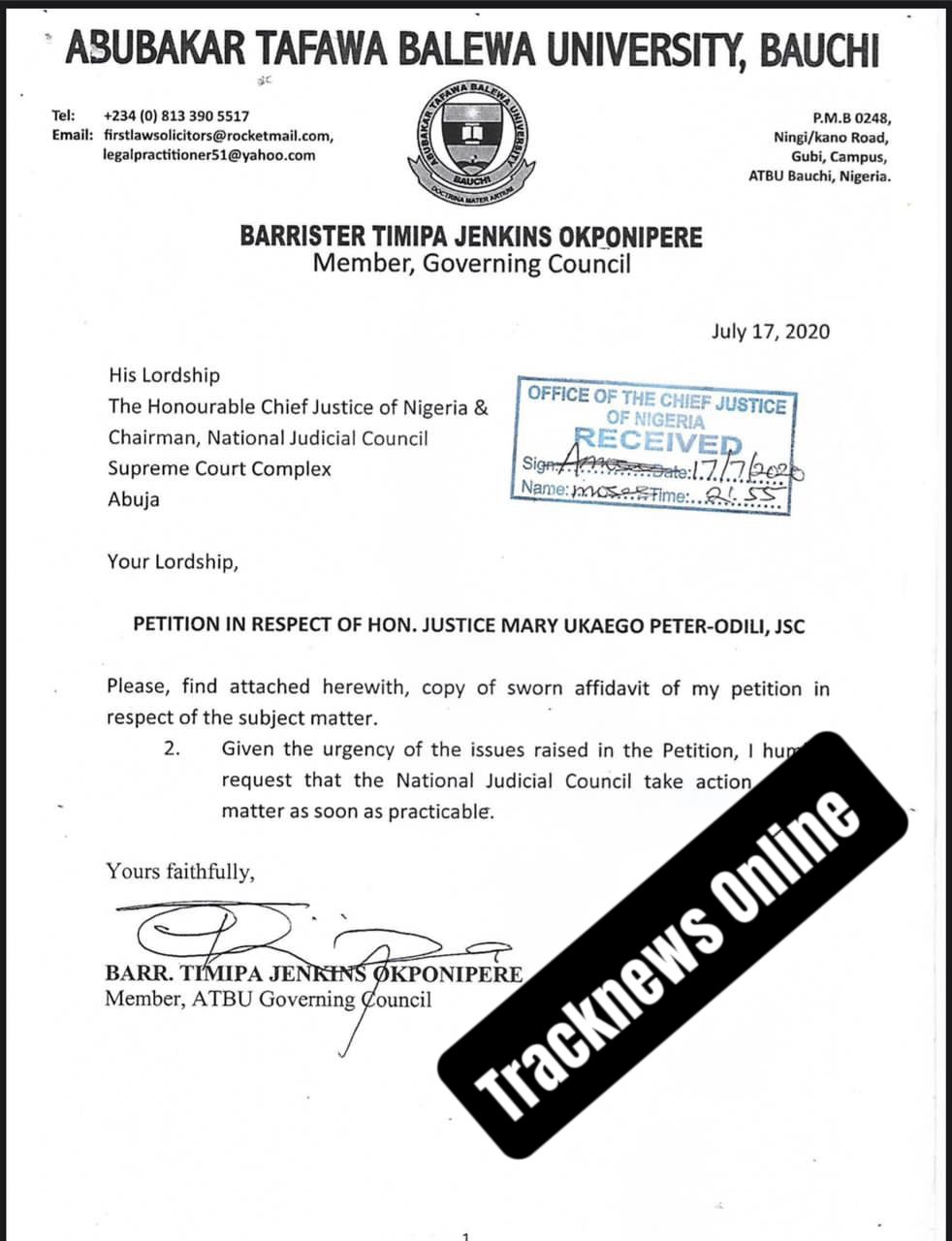 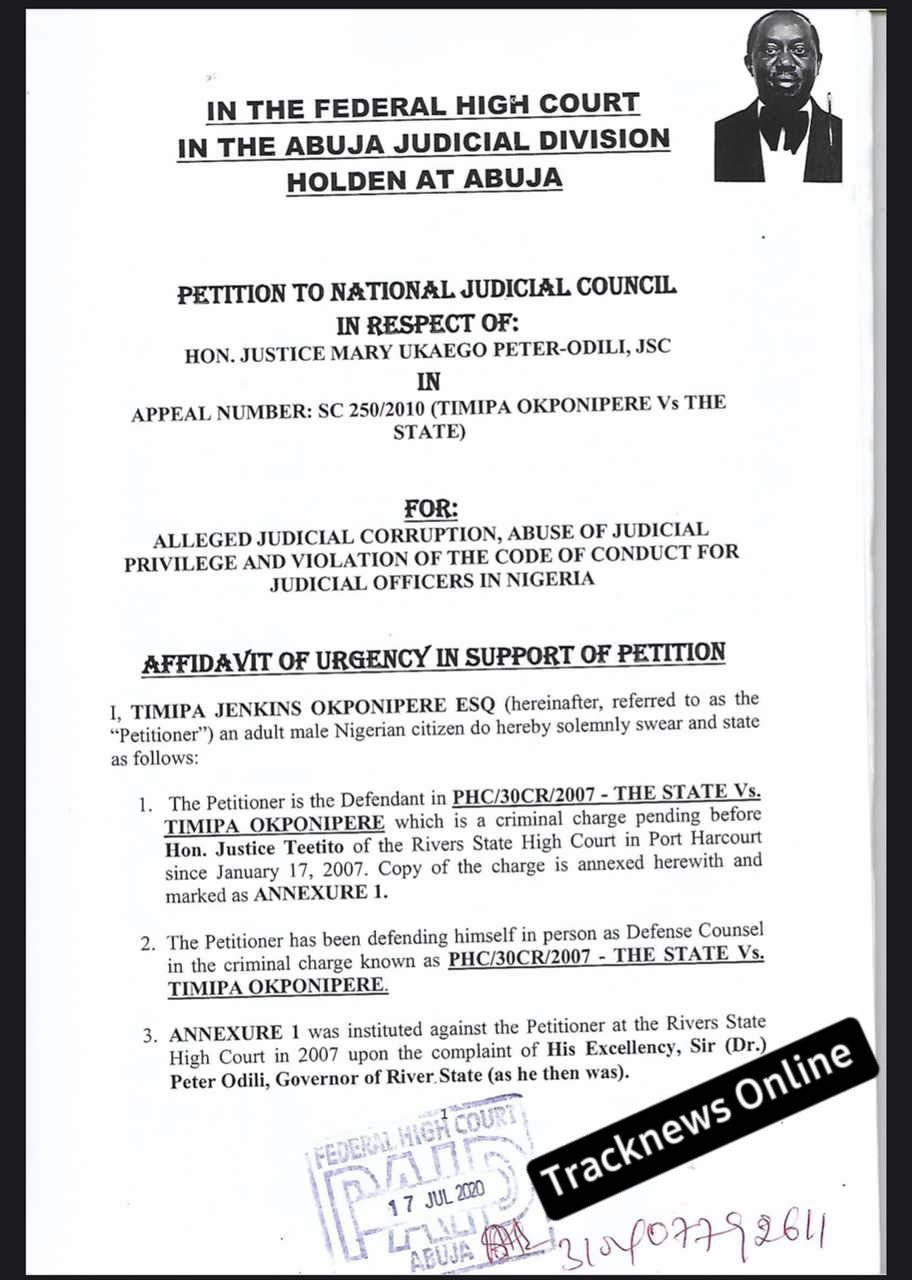 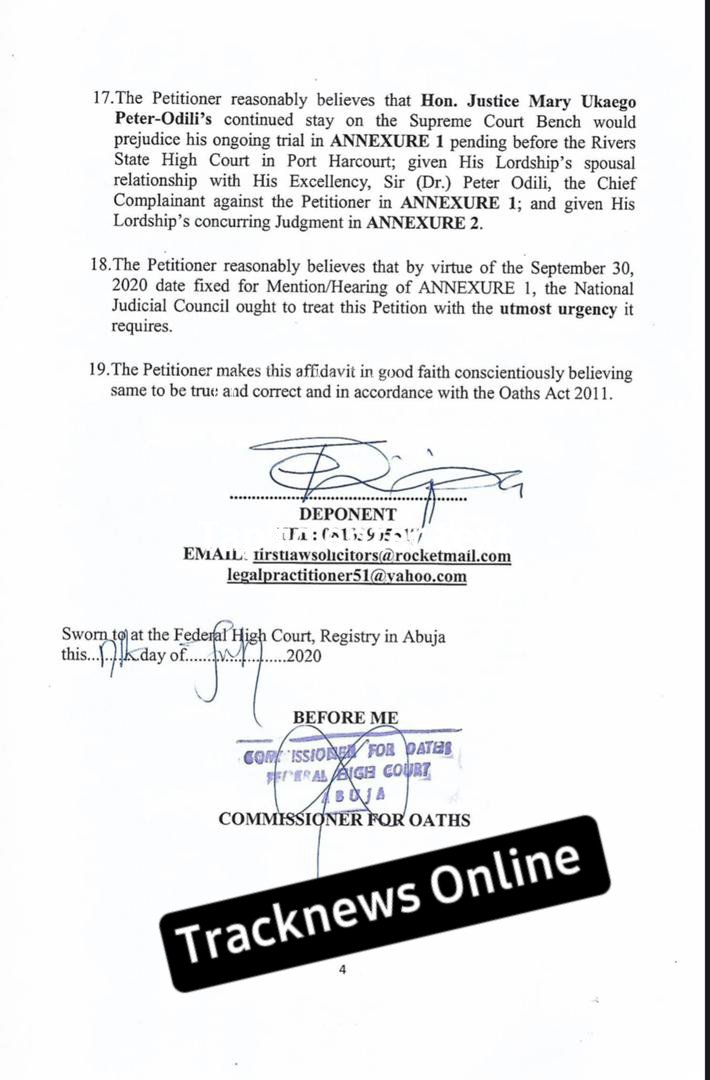 Related Topics:How Justice Mary Ukaego Peter-Odili Became The Complainant The Prosecutor And The Judge In Her Own Cause
Up Next