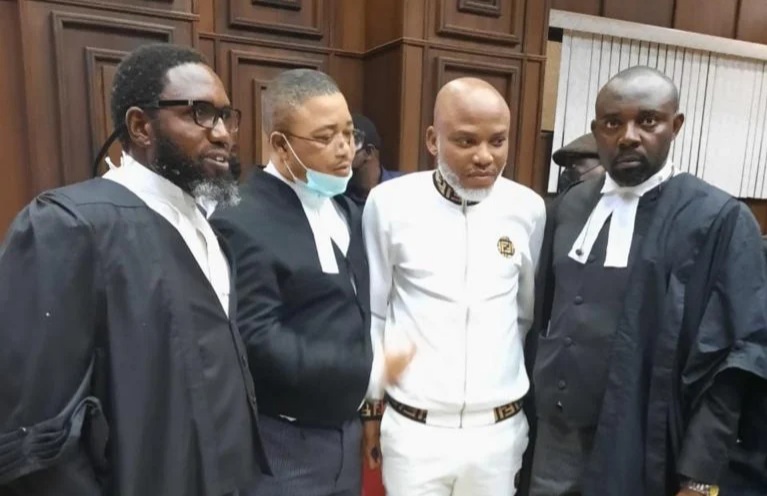 The south-east council of traditional rulers and representatives of Igbo archbishops and bishops have called on the federal government to affirm the rights of Nnamdi Kanu, leader of the proscribed Indigenous People of Biafra (IPOB), and that of his lawyers.

In a statement jointly signed by Anthony Obinna, Nnaemeka Achebe, and Chibuzo Opoko, they commended IPOB for listening to their appeal and calling off the sit-at-home order.

The monarchs and religious leaders said the cancellation of the sit-at-home has offered some relief to “the already distressed social and economic life of our people”.

They, however, expressed concern about the difficulties encountered by Kanu’s lawyers during his trial.

TheCable had reported that Kanu’s lawyers walked out of the court last Wednesday in protest over the refusal of the DSS to allow some other lawyers in the team to gain access to the courtroom.

Consequently, the trial of the IPOB leader was adjourned till January 19.

“The Joint Body is relieved that the Anambra State Gubernatorial Election was conducted without any major incidents or breach of the peace.” the statement reads.

“It also commends the people of Anambra State, the Independent National Electoral Commission (INEC), the Security Forces, the National Peace Committee, and all the other actors who contributed to the successful conduct of the election.

“The Joint Body is highly disturbed by the persistent complaints by the IPOB legal team about the difficulties it encounters in dealing with the Department of State Services (DSS) and, especially, the sad events which occurred during Mazi Nnamdi Kanu’s appearance in court last Wednesday, November 10.

“This Body urges the court to affirm the fundamental rights of Mazi Nnamdi Kanu, his lawyers, and other stakeholders. Failure to do so would lend weight to the suspicion in some quarters of a planned secret trial, as well as neutralise all the efforts being made to establish peace in the South East.

“The Joint Body acknowledges the statement by the Attorney-General & Minister of Justice, Mr. Abubakar Malami SAN, in which he affirmed that the Federal Government was open to a political solution to Mazi Nnamdi Kanu’s case.

“This statement is in line with the proposal earlier made by this Joint Body and by other well-meaning persons and groups in Nigeria. This Body therefore eagerly awaits the concrete steps that would be taken in this regard.”

The joint body called on the people of the region to sustain the current effort on sustaining peace in the zone “until true peace, based on justice and equity, is achieved in our land”