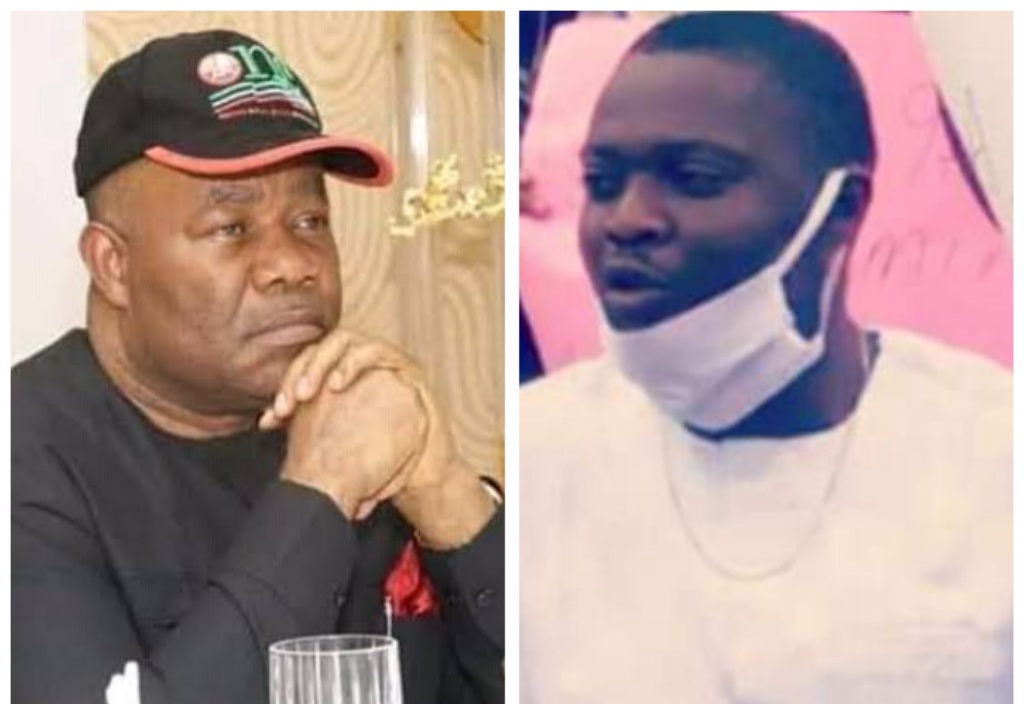 The Ijaw Interest Advocates group known as the the Izanzan Intellectual Camp IIA has asked the minister of Niger Delta Affairs Godswill Akpabio to stop trading with the development of the Niger region by using president Buhari name to loot the Niger Delta Development Commission NDDC funds might for the region Development with his cohorts.

The group in a press statement signed by its leader comrade Arerebo Salaco Yerinmene SNR said, the Presidency should call the minister of Niger Delta Affairs Godswill Akpabio to stop using the name of Mr. President Buhari to give flimsy excuses over constituting the NDDC board.

Akpabio’s reckless and consistent use of Mr. President name to defend the illegality in NDDC is portraying President Buhari’s name and image in a very terrible and bad light before the good people of Niger Delta region. As the thinking of most people from the south south region is that President Buhari have an hidden and evil agenda against the people of the Niger Delta, but is not the truth.

Check from the achieves, we have realised over time that whenever congent demands are made by Nigerians, most expecially people from the Niger Delta Region to do the lawful process by following the act establishing the NDDC, the minister, Godswill Akpabio will activate his media boys to delibrately put forward Mr. President name as a shield to give some very funny and flimsy excuses why the board of NDDC is delayed or can not be constituted now.

Comrade Arerebo Salaco further stated that, there are over a million matters at the President’s table at any given time which of course NNDC is not one of the most pressing, because of workload on the table of the president, ministries and ministers are appointed to assist the President to supervise, present and guard the President on the right path. But the case of minister of Niger Delta Affairs under the watch and surpervison of Akpabio saddled with the responsibility to advise the president the opposite is the case for selfish reasons. He is busy confusing himself, the President and the entire country just to maintain an illegality for personal financial gains.

Come to think of it, of all the ministries in Nigeria, the ministry of Niger Delta/NDDC is the most noisiest in the country because of the deceiful character and low integrity of one man that could go to any extent to sustain an illegality for personal benefits to the detriment of the whole region. These offices should only be given to people with good character, people ready to serve the country and not very low desperate people that do not wish this government and the country any good.

President Buhari, should know that Akpabio that is using his name as a cover up to intimidate people at every slightest opportunity over the delay of the constitution of NDDC substantive board won’t call his name for anything good after 2023. Those that brought him to politics can testify.

The Presidency and the President’s family should remember to keep good legacies even after office.

The so called Akpabio’s name that is deceifully using the name of Mr. President Buhari to protect illegality in the south south region to achieve his personal aim won’t be mentioned tomorrow when the history books will be open and cited. That government flagrantly disobeyed the laws guarding the establishment of an agency created to develop an emporished region for this number of years.

When Akpabio took charge, the manner the idea of the forensic audit was sold to the world and Mr. President, all right thinking leader will fall for the bait. But today is very obvious Akpabio’s idea from onset was not for any useful forensic auditing but to buy time to hold unto the financial jaws of the NDDC for personal gains hence Mr. President should be very careful.

Apparently, NDDC under the lordship of Akpabio is 100 times more corrupt than anytime ever since the inception of the commission. Today to continue with the spree of looting the delay tactics music have changed from the forensic to repositioning, and sensational headlines like Politician are Jittering over that empty forensic report. Close to a trillion has pass through Akpabio but nothing on ground except the media tigers on the payroll of Akpabio defending illegality and attacking from every angle. The entire useful period of this administration has been wasted for worthless forensic and story of repositioning. We dare you Akpabio to publish the forensic now, let the entire country see it and comment on it. Why keeping it as a secret document.

The simple reasons Akpabio is totally opposed and will do everything possible, including putting his future integrity on the slaughter bench to delay the NDDC substantive board constitution are very clear.

He also stated Akpabio is try to cover the atrocities and damage he had caused the commission within this short period especially the amount of money he had looted through wasteful, unverifiable fake Desilting of water and emergency projects that are non in existence. More than half of the monies that has come to nddc during Akpabio’s reign has been wasted for the fake and non existing Desilting projects

With the board in place there will be some sort of accountability which he won’t be able to deep his filthy fingers to loot the commission the way he has access now. Currently, he is the Managing Director (MD), Executive Director Finance and Admin (EDFA), Executive Director Projects (EDP) and ironically, From the chain of credit of the finances of the NDDC from CBN to the point of debit at the last man in NDDC finance office are all totally under Akpabio’s absolute control.

To this very end,we are again appealing to President to shun the ill excuses of Akpabio to save the Niger Delta region from collapsing by constituting the substantive board in devoid of party affiliation and sentiments.