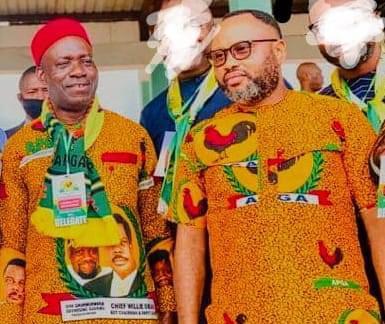 The Independent National Electoral Commission (INEC) has said that the Anambra Governor-elect, Charles Soludo and his deputy governor-elect, Gilbert Ibezim, will receive their Certificates of Return on Friday.

Tracknews Online reports that the National Commissioner and Chairman Information and Voter Education Committee, Festus Okoye, made this known in a statement on Thursday.

Okoye disclosed the commission will present the certificates to Soludo and his deputy at its office in Awka, the state capital.

He said: “Following the conclusion of the election and as provided for in Section 75 of the Electoral Act 2010 (as amended), certificates of return will be presented to the Governor-elect and Deputy Governor-elect tomorrow Friday 12th November 2021 at our state office in Awka.”

He, however, revealed that the commission has conducted an initial review of the Anambra Governorship election and will release a report soon.

Okoye added that the commission has started reviewing the Bimodal Voter Accreditation System (BVAS) technology to address the issues experienced during the election.

He said: “The Independent National Electoral Commission (INEC) met today Thursday 11th November 2021 and conducted an initial review of the Anambra Governorship election. The Commission is awaiting the reports of all officials deployed for the election for an in-depth review of the processes.

“However, after the supplementary election in Ihiala Local Government Area on Tuesday 9th November 2021 and before the process was concluded, the Commission commenced a preliminary review of the functionality of systems, particularly the newly introduced Bimodal Voter Accreditation System (BVAS).

“The system performed two functions on election day. First is the accreditation of voters using both fingerprint and facial authentication.

“Secondly, it snaps the polling unit level result sheets and uploads them in real-time to the INEC Result Viewing (IReV) portal. This aspect of the BVAS functionality performed optimally such that by the early hours of Sunday morning, results from 4,987 (88.5%) out of 5,634 polling units had been uploaded for public view.

“While still in the field, our ICT team responded to the identified glitches in the accreditation of voters and corrected them. Consequently, in the Ihiala supplementary election, there were no reported incidents of BVAS malfunction. We will carry out an in-depth examination of the system, review reports from accredited observers and the media and respond to all identified challenges ahead of the next major Area Council election in the Federal Capital Territory (FCT), holding on 12th February 2021.

“We shall again test run the system in the bye-election (s) that may arise before then. The Commission remains convinced that despite some glitches experienced in Anambra State Governorship election, the deployment of technology in elections is better than the best manual process”.

Related Topics:DeputyINEC Fixes Date To Present Certificates Of Return To Soludo
Up Next

2023 Presidency: I Never Said I Will Step Down For Tinubu — Yahaya Bello