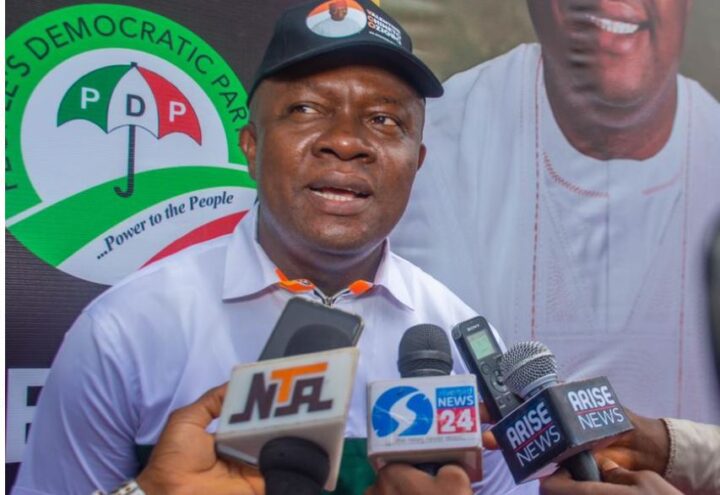 The candidate of the Peoples Democratic Party (PDP), in the just concluded Anambra Governorship Election, Valentine Ozigbo, has slammed security agencies and the Independent National Electoral Commission, INEC, over their conduct in the election.

Tracknews Online reports the candidate of the All Progressives Grand Alliance, Chukwuma Soludo, was declared the winner of the election by INEC.

While Ifeanyi Ubah of the Young Progressive Party came fourth with 21,261 votes.

“Just called Professor Chukwuma Soludo and congratulated him on being declared the winner of the Anambra State governorship elections, 2021. I wished him well and prayed for his success,” the PDP candidate said.

According to the PDP candidate, the just concluded election was fraught with many shortcomings, with security operatives failing to provide peace for campaigns to hold.

He said: “This election was fraught with a lot of shortcomings on the part of various government institutions. The security agencies failed to provide a peaceful environment for campaigns to hold. On election day, they were absent from many polling centres leading to elections not holding or held in situations that allowed for chaos and fraud.

“The national electoral commission presented untrained and poorly trained staff who could not operate the voting machines in many places. They failed woefully in providing logistical support for their staff and so elections started very late in many places and did not hold in many others.

“The use of government funds and resources to corrupt, coerce, and intimidate voters, PDP party agents, and electoral officials was a major factor in determining the outcome of this election.

“All of these led to the disenfranchisement of the greater percentage of voters and staining the course of democracy. I will be dedicating time to champion the positive change we need to ensure that future elections are truly free and fair and that the will of the electorate prevails.

“Denominational politics was also a factor. We need to do a lot more to ensure that competence is never sacrificed on this altar and that democracy is practised in line with its truest tenets.

“In all, I am more determined to work for a better future for our children by remaining in active politics and rebuilding our party to be more united and more robust for those who come after us. Ka Anambra Chawapu.”