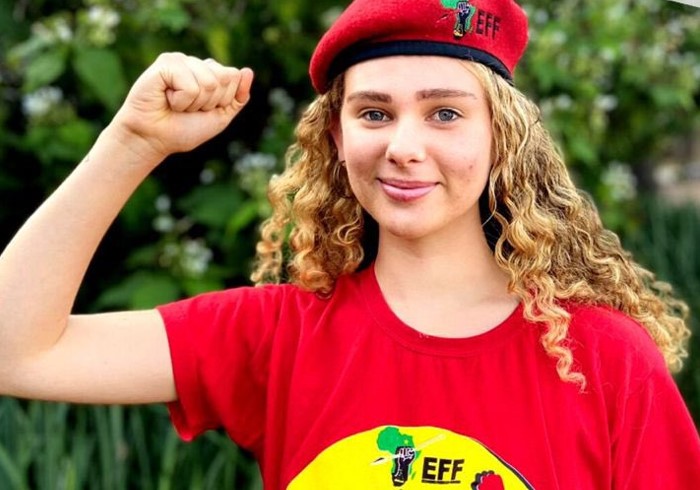 Jesse Griesel doesn’t look like the usual member, wearing the red beret of South Africa’s Economic Freedom Fighters (EFF), the party that intends to shake up the country’s political landscape.

She is a 19-year-old, white, Afrikaans-speaking student who was recently elected to the University of Cape Town’s Student Representative Council (SRC) under the EFF label.

But in South Africa, where racial tensions are common, her position has not been welcomed by some people. When Miss Griesel announced her candidacy for the SRC in September, a social media user called her a “race traitor.”

Some 27 years after the end of white minority rule, when Nelson Mandela was elected president in South Africa’s first democratic elections, calling the country “the rainbow nation”, Miss Griesel said in an interview that the negative reaction shocked her.

“Being called a race traitor was something that I found very interesting and very telling about South Africa today. It insinuates that there’s still an ‘us’ and a ‘them’ club.”

To understand the reaction she faced – you have to understand how the EFF rocked politics in South Africa.

Formed in 2013, it is led by the fiery Julius Malema, who modelled himself after the late Venezuelan President Hugo Chavez and unabashedly defends the interests of poor black South Africans.

The party describes itself as “a leftist, radical, anti-imperialist and economic emancipation movement, inspired by the broad Marxist-Leninist school of thought”.

They are often accused of being anti-white. This is because they have repeatedly demanded that white South Africans return the land taken to blacks.

Some EFF supporters sometimes sing the apartheid-era song “Kill the Boer, kill the farmer”, a very controversial song that a court has ruled as hate speech and is seen as directed against the white farming community.

We Saw It Coming, They Are Easterners – Nigerians React To Obi Cubana’s Arrest

Owner of collapsed Ikoyi building got approval for 15, not 21 floors: LASBCA