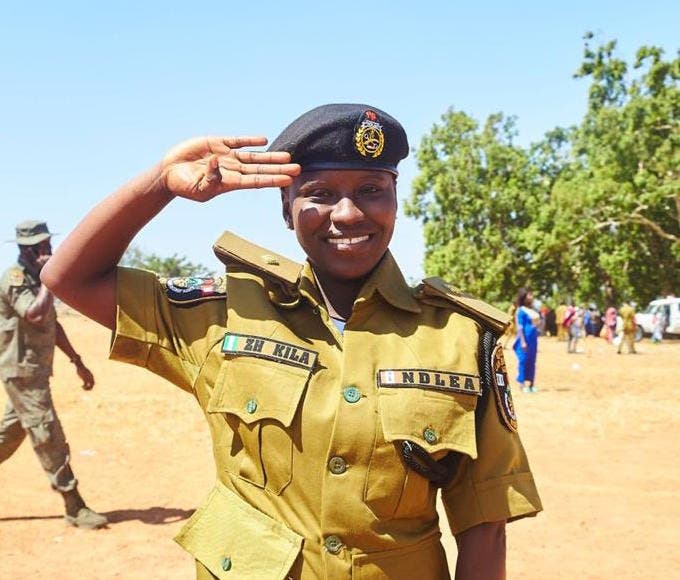 Zainab Aliyu Kila, the Nigerian lady framed by a drug cartel while traveling for lesser Hajj in Saudi Arabia in 2018, has joined the National Drug Law Enforcement Agency, NDLEA.

Recall that on December 26, 2018, Miss Aliyu, then a student at Maitama Sule University, Kano, was arrested by Saudi authorities for allegedly traveling with a luggage containing unlawful substances believed to be tramadol. Zainab had traveled through the Mallam Aminu Kano International Airport, MAKIA, for Lesser Hajj with her mother, Maryam, and sister, Hajara. Shortly after she arrived at the Jeddah Airport, the Saudi Authorities intercepted a bag containing banned substances and traced it to Zainab and she was arrested in her hotel room.

After several appeals by her parents, media, and civil society organization, authorities discovered that drug barons, in connivance with Kano airport workers, tagged a luggage containing the drugs in her name. Read here. She was released after Nigerian and Saudi authorities independently investigated the matter and established her innocence.

She returned to the country, completed her mandatory one-year NYSC scheme, and has now been enlisted into the NDLEA. She was among the 2,000 newly trained NDLEA officers commissioned at the agency’s academy in Jos, Plateau State on Friday, November 19.

Related Topics:Joins NDLEALady Framed By Drug Cartel And Jailed In Saudi Prison
Up Next

Face Of Notorious Leader Of Kidnap Gang Nabbed In Abuja