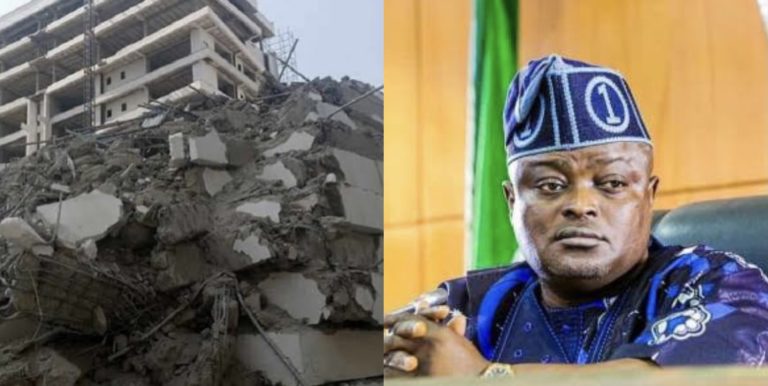 An assemblyman said that the concerned officials will be invited after the report of findings from his team has been submitted to the state assembly.

The Lagos State House of Assembly has revealed that it will summon state officials over controversies surrounding the collapsed luxury building in Ikoyi.

The chairman of the House Committee on Physical Planning and Urban Development, Nureni Akinsanya,made this disclosure while speaking at the site of the collapse on Wednesday.

The lawmaker said that the concerned officials will be invited after the report of findings from his team has been submitted to the state assembly.

“Mr Governor has also spoken and given update. On our part, the House will carry out its own function. I am sure the leadership of the House led by Speaker Mudashiru Obasa will set up a committee or panel to look into the report, invite those to be invited and if we have to amend our laws, we will,” Mr Akinsaya said.

The development comes as controversies surrounding the approval of the building plan continue to mount.

Also, Lagos Deputy Governor Obafemi Hamzat said the collapsed luxury building in Ikoyi was shut down for months because it was unsafe and failed structural tests.

He explained that the building was shut down for some months after some anomalies were noticed by the Lagos State Building Control Agency (LASBCA).

In the wake of the revelations, Lagos state governor Babajide Sanwo-Olu suspended Mr Oki, the General Manager of LASBCA indefinitely.

The governor revealed that he was setting up an independent panel to probe the collapse. He vowed to find out and punish those indicted by the probe.

On Wednesday, the National Emergency Management Agency said that death toll from the collapsed building had risen to 22.