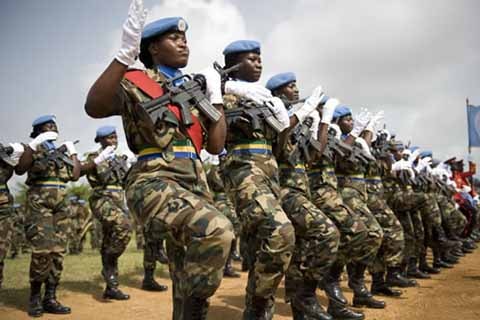 Hundreds of women between the age of 18-35 flocked to the National Defence Ministry of Liberia to become a part of the Armed Forces. The step came after Liberia disclosed its plan to beef up the army strength, beginning with only female recruitment.

Sam Collins, Assistant Minister of Defence for Public Affairs said “The Ministry of and AFL are considering and prioritizing the recruitment of persons with professional civil specializations in the areas of Medical Specialties, engineers of all categories, lawyers, maritime professionals, agriculturists, information technology, band, and mortician,”.

As per the Army Chief, fitness training was organized for the women from Monrovia considering the research that highlighted that they were less fit than the women from rural areas. However, rural women did not fare well when it came to academic requirements for the recruitment.

The basic academic qualification required for women to be eligible for enlistment is either a vocation training or high school graduate. Besides having a zest to serve the armed forces, more women see this recruitment as an opportunity to overcome the unemployment issues.

Asst Minister Collins from the Defence Ministry issued a statement on Monday, stating that, “The preparatory training exercise is expected to build the capacity of females residing in Montserrado County. Females in other parts of Liberia will take a preparatory aptitude test ahead of the main recruitment process that is expected to be announced at a later date.”

He further pointed out that those women who will participate in the preliminary exercise are not confirmed jobs but will be enlisted into the Ministry of National Defence based on their academic qualifications during the main recruitment drive.