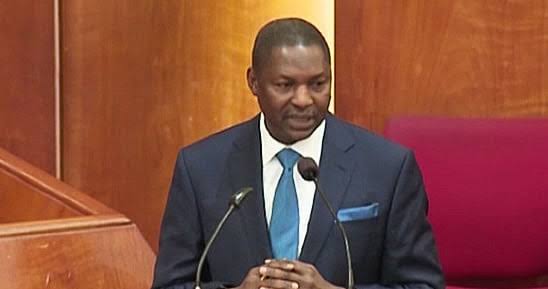 ●As Minister plans to collect cost of recovery from looted fund

There was protest as Committee Chairman, Hon Ugonna Ozurigbo, shielded Minister of Justice and Attorney General of the Federation (AGF), Abubarkar Malami, from responding to questions on recovered loots, payment of about $500 million consultancy services for Paris Club as well as outsourcing of legal services to private lawyers.

The questions asked by some of the lawmakers who attended the 2021 budget performance and 2022 budget defence, namely: Hon Chinyere Igwe (PDP-Rivers) and Hon Ademorin Kuye (APC-Lagos) were not responded to, as Hon Ozurigbo ruled that the answers to the questions will be provided in the future.

Speaking after the Minister’s presentation, Hon Igwe demanded details of the actual amount of looted funds recovered so far as well as the huge money being paid on consultancy services on the Paris Club refund.

He observed that: “There are trending issues in the Nigeria polity today and one of the issues is the payment of consultancy services for Paris Club. A whopping sum of the region of 400 to 500 million dollars is being paid and I am sure you are aware of that.

‘Two, you made reference to the recovery of looted assets. With the successes recorded so far in this regard, Nigerians need to know what has been recovered and where the money has been kept because there has been controversy as to whether the money is with the EFCC and ICPC. Where is this money?

On his part, Hon Ademorin Kuye (APC-Lagos) queried the rationale behind over N2.5 billion spent on outsourcing of legal services to private lawyers while lawyers on the Ministry’s payroll are idle.

Hon Kuye also requested for details on the decongestion of Correctional Centres across the country, prosecution of offenders, the number of persons released and the number of convictions and why the Ministry was outsourcing the Maritime cases to lawyers outside the Ministry.

He said: “I saw the sum of N43 million appropriated for local training in your 2021 budget and N35 million has been released, while N32.1 million has been expended. Despite these training for our lawyers, we still see that a lot of the jobs are outsourced.

“We spent N2.5 billion for legal services. You spoke of some limitations about lawyers not being able to take up those jobs. What are these limitations?

“I want to ask about the anti-torture legislation. You will recall that most of the protests are as a result of abuse of office by some of our Police Officers.

“I want to find out if the legislation is now in place and if it has not been put in place, what is the Ministry doing about putting it in place? Also, sometimes in 2017, you promised us an anti-torture policy. I want to find out how far you have gone with that policy.”

However in his ruling, Hon. Ugonna Ozurigbo who presided over the session ruled that the answers to the questions will be supplied in the future.

“The questions are noted. We will have to give the Minister another date to respond to these questions.”

Earlier in his presentation, the Attorney General of the Federation affirmed that the “Ministry was mandated to embark on the recovery of looted assets and we have recorded an appreciable milestone in this regard as monies recovered are promptly deposited into government treasury thereby increasing the revenue profile of the government.

“Presently we are making efforts to ensure that we are allocated some cost of collection from recovered funds to finance our recovery operations.

“Presently, we are making efforts to ensure that we are allocated some cost of collection from recovered funds to finance our recovery operations. To date, there are large sums of illicit money stashed abroad for which we are working at close quarters with ICPC, and EFCC as dependable allies to effect recovery.

“The Ministry handles public prosecution and Civil Litigation for the federation and sometimes outsources these services particularly as it relates being prosecuted internally where State Counsels have legal limitations to court appearances.

“We all know that legal services (especially litigations) are not cheap. Furthermore, the Justice Sector reforms we are currently undertaking are costly to execute. We, therefore, need your kind support with adequate funding to successfully prosecute them.”

The Minister who further observed that the rule of law as practised all over the world is the pivot upon which democracy revolves, however, observed that Nigeria’s justice sector as presently constituted is bedevilled by funding inadequacies, too much for our comfort.

“The prime drivers of any given maturing democracy such as ours, are the Rule of Law, Due Process of the Law, Human Rights, International Obligations and Allied Matters. Evidence reveals that the Administration of Justice which guarantees sustainable peace, equity and fair play is undeniably capital intensive.

“In the circumstance, we need to re-conceptualise the existing funding pattern of the Justice sector.

“Lamentably, however, practically all the Parastatals under the purview of the Federal Ministry of Justice are in dire need of funding. For me, this is as dangerous as it is disturbing because funding gaps in the face of competing challenges could endanger the effective administration of Justice, and cause an unwarranted travesty of Justice.

“True enough, the Justice sector is not primarily a revenue-generating sub-sector. This is because our constitutional obligations revolve around social services geared towards a peaceful, cohesive, and prosperous Nigeria.

“However, the Ministry was mandated to embark on the recovery of looted assets and we have recorded appreciable milestones in this regard as monies recovered are promptly deposited into government treasury thereby increasing the revenue profile of the government.

The Minister also disclosed that the Federal Executive Council, FEC had asked his office to cause a memo for the establishment of a Federal Taskforce to review and validate contracts, Judgments and Arbitral Awards and implement the Federal Verification System to prevent abuses similar to the P&ID case,” he noted.

Some of the challenges identified by the AGF include; cases of COVID-19 pandemic, kidnapping and armed banditry.

“In the face of scarce but allocated resources and granted the fact that the Justice sector superintends over the rule of law, it is hereby reasoned that we should reconceptualise the Justice architecture in tandem with the vital role of Justice Delivery and administration in a heterogeneous society such as ours.

“If we are to crystalize our democracy firmly, it is incumbent on us to build a bridge across Justice, covering a broad spectrum of activities because of our plural composition and divergent views on National issues.

“The year 2022 is another defining moment in the annals of our history. In any event, Federal Ministry of Justice shall do; that the nuances of Justice dispensation,” Malami said.

Related Topics:Looted funds: Drama as Committee Chairman shields AGF from answering questions on outsourcing of legal services
Up Next

My Brother, Aides Not Behind My Arrest In Kenya – Nnamdi Kanu