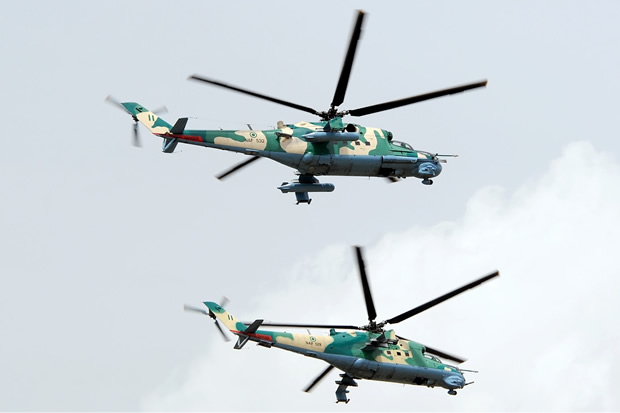 Nigerian security forces have executed an air raid on the residence of a notorious bandit leader in Sokoto State known as Bokkolo.

The raid was said to have been carried out in a joint operation by operatives of the Nigeria Army, Air Force, Police, Department of State Services (DSS), and others.

The security forces were led by the General Officer Commanding 8 Division of the Nigerian Army, Sokoto, TrackNews Online gathered.

During the raid which commenced on Friday, the residence of Bokkolo was reported hit and his wife and mother, including other relatives, were reportedly caught in the fire.

Though several bandits were killed by the airstrikes, it is unsure if Bokkolo himself was killed or survived.

Speaking on the air raid, a resident of the area told Daily Trust that many bandits loyal to the notorious leader were killed.

“But we are not sure whether he is among the dead, but his wife and mother were at home during the raid,” the source said.

Some of the bandits also escaped to neighbouring communities such as Tsabre, Sarkin Darai and Tiɗibale which are between Goronyo and Unguwan Lalle in Sokoto.

A senior army officer also told Daily Trust that hundreds of bandits were killed around Isa and Sabon Birni areas and the operation went as far as Nigerien border as the security operatives combed the hideouts and forests used by the bandits.

Meanwhile, the National Drug Law Enforcement Agency (NDLEA) has announced the arrest of a suspected drug dealer, Okafo Okwudili Moses in connection with the chunk of illicit hard drugs found in one of the toilets of the Murtala Muhammed International Airport, (MMIA), Lagos.

The drugs (cocaine), weighing about 2.55 kilograms were discovered in a toilet at the E-Arrival hall of the MMIA according to a statement on Sunday by the NDLEA Director of Media and Advocacy, Mr. Femi Babafemi.

The statement explained that the drugs were discovered at the airport toilet on Friday 12th November where it was dropped by the trafficker over the suspected fear of getting arrested by narcotics officers at the airport.

#EndSARS: US Threaten To Halt Military Aid To Nigeria Over Human Rights Abuses