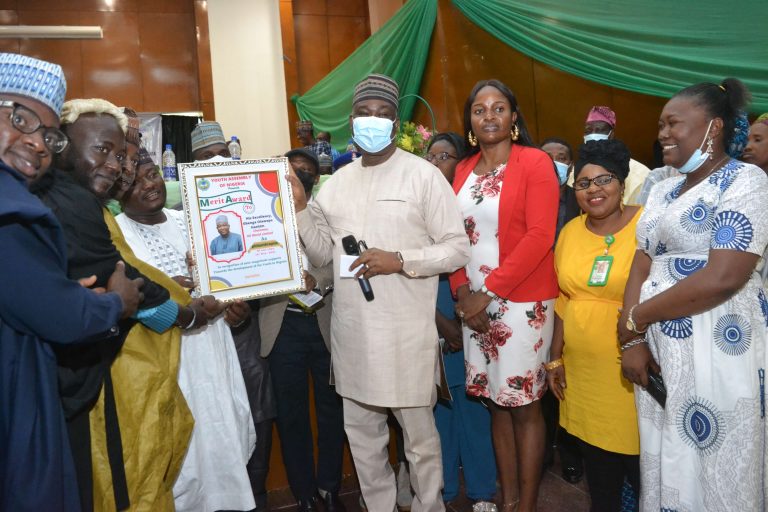 It was an emotional re-union as loyalists of former presidential candidate and 3tain of the All Progressives Congress, Gbenga Olawepo-Hashim, converged as he received a Merit Award from the Youth Assembly of Nigeria.

The award was conferred on the humane and urbane politician on Monday in Ilorin, the Kwara State capital.

The Award was given “in recognition of his pedigree as a successful entrepreneur, a student/youth activist, and a progressive politician” as part of the activities to mark this year’s edition of the National Youth Day and the inauguration of the third Assembly of YAN.

The loyalists, who are mostly youths he had groomed and mentored in politics, used the occasion of the award to publicly acknowledge his impact on their social and political trajectory in the state and beyond.

One of the mentees, Alhaja Mariam Wasiu from Moro, said she lost her marriage for attending Olawepo-Hashim’s campaign rally in 2007.

Now, a Commissioner in the Sate’s Local Government Commission, Wasiu disclosed that her husband was livid and never forgave her for leaving their 14-day-old baby to attend a campaign rally.

Another loyalist, Hon. Musbau Eshinrogunjo, who described himself as “Gbenga Olawepo’s first son” at the occasion, is presently a Special Assistant on Rural Mobilisation to the Kwara Sate Governor, AbdulRahman AbdulRazaq.

Eshinrogunjo was a former member of Olawepo-Hashim’s Youth Vanguard in the state.

Another “son” who publicly identified himself at the event was Ambassador Yahaya Seriki, a gubernatorial aspirant in 2019 and a House of Representatives candidate for the Democratic People’s Party in the 2011 elections.

The present Deputy Chief Whip in the State House of Assembly, Hon. Alli Jimoh, was another “son” in the Gbenga Olawepo Youth vanguard of more than 10,000 members across the state.

Folasade Aransiola, an APC chieftain from Irepodun Local Government of the State, was among ladies who also publicly identified themselves as “Gbenga Olawepo’s “daughters” at the occasion.

The loyalists gleefully recalled his Social Responsibility and Charity in the past, which include: Micro business grant given to 500 women and youths of the sum of N20,000 to N30,000 each the state; scholarships for indigent students; community development contributions; rehabilitation of neighbourhood roads in some communities; and sponsorship over 200 youths in the acquisition of digital skills in year 2021 alone across Nigeria with 15 participants from Kwara State.

According to them: “Olawepo-Hashim has also contributed to Islamic fundraising in Offa in 2006 being the highest donor at such events.

“His annual provision of food to many during fasting seasons in the past is still well remembered.

“Even though a Christian, he sponsored many on pilgrimage to Mecca.

“To advance the works of Christianity, he has built many churches and donated lands for many.

In his speech at the ceremony, Olawepo-Hashim thanked the group for the honour and encouraged the youth to awaken the spirit of entrepreneurship and resourcefulness in them to be able to stand a better chance in the present digital age.

He maintained that entrepreneurship remains the shortest route to break the glass ceiling in today’s digital age and implored the youth not to indulge in wanton luxury but to invest their earnings to secure their future.

Related Topics:My husband divorced me for attending political rally — Commissioner
Up Next