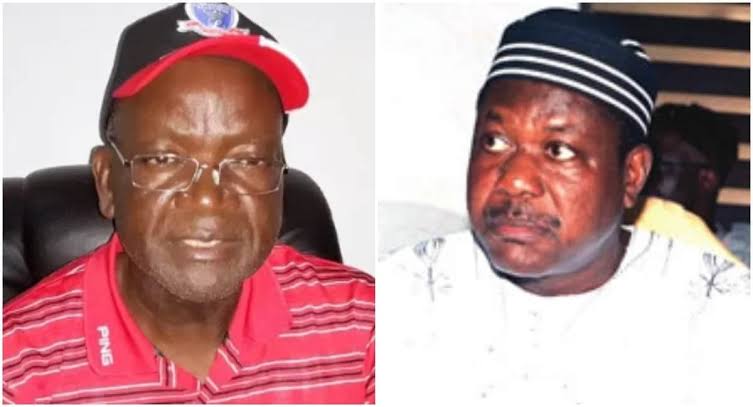 The Minister of Special Duties and Inter-Governmental Affairs, Senator George Akume, Friday asked a Makurdi High Court to grant him more time to file his memorandum of conditional appearance in the N60 billion suit instituted against him by Governor Samuel Ortom of Benue State.

This was contained in a motion filed by his lawyer, S. I Ameh(SAN).

Counsel to Governor Ortom, Okon Efut (SAN) did not oppose the application by Akume’s lawyer.

Consequently, Akume’s lawyer, Ameh (SAN) who had three pending processes before the court withdrew his notice of preliminary objection filed on the 26th October 2021 and filed a motion on notice praying the court to set aside the issuance and service of the writ of summon and also strike out the suit for want of jurisdiction.

The motion is also seeking the court to set aside its orders made on the 29th September 2021 for substitute service of the court processes on Akume, claiming it was obtained by fraud.

Okon (SAN) submitted that since the motion was filled and served on him few minutes to the time of the court, it is a subtle way of applying for an adjournment.

He told the court that he shall respond to the motion appropriately within the time stipulated by the law and the rules of the court.

Okon (SAN), also noted that he expects the defense team to file more motions as they are yet to file their defense to the suit, even though they are out of time.

Justice Ityonyiman adjourned the matter to December 10th, 2021 for hearing of Motion filed by Akume, seeking to set aside the order or substituted service on Akume and also stop the suit.

Governor Ortom instituted the suit against the Minister over his comments in the press conference of Monday,30th August,2021.

Governor Ortom in the suit is seeking N50 billion as general damages for libel and N10 billion as exemplary and aggravated damages.

In the statement of claim, Governor Ortom seeks amongst other things a declaration that “the text of Senator Akume’s press conference on 30th August, 2021, in Abuja and the reports in various national dailies is scandalous, malicious and injurious to his person.”