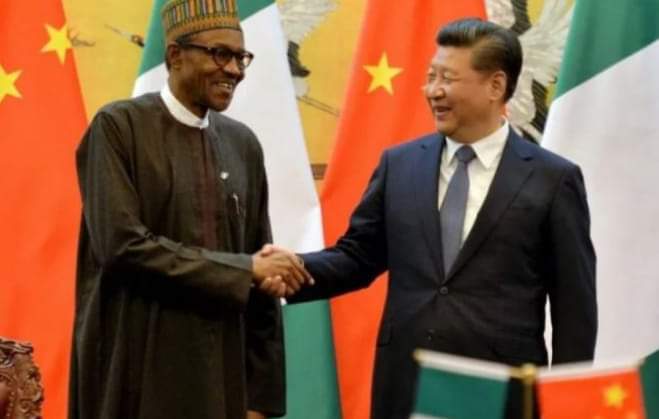 The loan has a maturity period of 20 years including a seven-year grace period. According to the deal signed with the Chinese lenders.

According to The PUNCH, some Economic and financial experts have warned the Federal Government that Nigeria risks losing key national assets to China in the event that it defaults in paying back loans obtained from China which is currently put at $3.48bn.

They spoke against the backdrop of the takeover of Uganda’s only international airport and other key assets over the East African country’s inability to repay a $207m loan obtained on November 17, 2015 from the Export-Import Bank of China.

China has reportedly rejected recent pleas by Uganda to renegotiate the toxic clauses of the 2015 loan.

This came as Nigeria’s Minister of Transportation, Rotimi Amaechi, in August 2020 hinted about the possibility of Nigeria forfeiting its assets to China in the event of loan default.

Amaechi reportedly said Nigeria had waived immunity on a loan, which means China could take the country to arbitration in the event of a default.

The minister, however, added that there would be no need for China to claim any infrastructure once Nigeria repaid its loans to the Asian country.

“We must learn to pay our debts and we are paying, and once you are paying, nobody will come and take any of your assets,” Amaechi said.

However, financial analysts hinted about the possibility of Nigeria forfeiting key national assets to China if the country defaulted on its $3.48bn loans.

They also advised the Federal Government to properly review the loan agreements with China to save the country from facing a situation similar to that of Uganda.

The Chief Executive Officer of SD&D Capital Management, Idakolo Gbolade, said Nigeria might forfeit certain assets in the event of a loan default.

Asked if Nigeria faced any risks on its China loans, Gbolade said, “Yes, it is very possible. If you remember about a year ago, there was serious concern in the National Assembly on the loans given by the Chinese Exim Bank to us, and I am sure the loan clause also includes forfeiture of national assets.”

The expert, however, expressed confidence that Nigeria was capable of paying back its debt.

An economist and professor of Economics and Public Policy at the University of Uyo, Akpan Ekpo, said the development in Uganda was worrisome and exemplified some of the dangers of borrowing from external sources.

He, therefore, advised the government to ensure that loan agreements with China were properly appraised.

Ekpo said, “It is an issue of concern; that is why in any loan agreement with China, we have to read in between the lines. We have to make sure we really understand their agreements.

“We should make sure that Nigerians are involved in the loan negotiation process. Experts should be carried along so that they can properly understand both the agreement in English and in Chinese.

“If the loans have clauses that may cost us our assets or even our sovereignty – as the debate was earlier in the year – that would be disastrous.

“So they should take experts with them when they go to negotiate the loans they collect from China, not just people from foreign affairs.”

A professor of Economics at the Olabisi Onabanjo University, Ogun State, Sheriffdeen Tella, equally expressed a similar view, stressing that all loan agreements between Nigeria and external sources should be properly studied by experts.

He said, “It could happen to any African country because they are all thinking of borrowing. But I think that since people have kept the conversation alive now, the government will be very careful with loans collected from China.

“There is, however, the need for an assessment of government external debt from different sources now. We have to start looking at it and there is a need to study the documents that contain the agreements of some of these loans to prevent a similar occurrence.

“We need to start asking ‘what are the contents or the conditions of the loans?’ There is also a need for the government to create a means for offsetting such debts.”

The Managing Director of Cowry Asset Management Limited, Johnson Chukwu, said the country should not have a problem paying back the loan if the economy thrived sufficiently.

He said, “An interest of 2.5 per cent is not high. The key challenge is that did we invest the money in productive assets, and are we getting the value for the money? Was the project cost-optimal?

“It is important to note that investment in infrastructure should lead to an expansion in the country’s ability to generate revenue. If the economy thrives, paying back the loan should not be a problem.

“However, if certain reasonable conditions are not met, it may have a catalytic effect on the economy with the country finding it difficult to pay back the loan.”

Although the Federal Government has been mostly secretive about the terms of the agreement of its China loans, the Debt Management Office has made some statements on them in recent times.

According to the DMO, the terms are compliant with the provisions of Section 41 (1a) of the Fiscal Responsibility Act, 2007.

In addition, the low interest rate reduces the interest cost to government while the long tenor enables the repayment of the principal sum of the loans over many years.

The Director-General, DMO, Patience Oniha, had in February said, “So far, let’s be very clear that there has not been any default, whether of local or international debt.”

The earliest of the funding agreements between Nigeria and China was signed in 2010 with an interest rate of 2.5 per cent yearly, a repayment period of about 20 years and a grace period of seven years.

If Nigeria is unable to pay its first debt by 2038, the country may have to lease out any of the Chinese-funded projects in Nigeria to China.

The first loan project was for the Nigerian national public security communication system project with $399.50m agreed on December 20, 2010 and disbursed.

The second loan was for the Nigerian railway modernisation project (Wu- Kaduna section) with $500m agreed on December 20, 2010 and disbursed.

The fifth loan was meant for the Nigerian four airport terminals’ expansion project (Abuja, Kano, Lagos and Port Harcourt) with $500m agreed on July 10, 2013 but $455.28m was disbursed, which is 91.06 per cent of the agreed amount.

The seventh loan was for the Nigerian 40 parboiled rice processing plants project (Federal Ministry of Agriculture and Rural Development), with $325.67m agreed on April 26, 2016, but nothing was disbursed.

The ninth loan was targeted at the rehabilitation and upgrading of Abuja-Keffi-Markurdi road project with $460.82m agreed on August 18, 2017 but only $80.64m was disbursed, which is 59.96 per cent of the amount agreed.

The 10th loan was meant for the Nigeria supply of rolling stocks and depot equipment for the Abuja light rail project with $157m agreed on May 29, 2018, but nothing was disbursed.

Lastly, the 11th loan was for the Nigeria greater Abuja water supply project with $381.09m agreed on May 29, 2018, but nothing was disbursed.

Nigeria also paid a total of $102.68m to the Exim Bank of China in the first half of this year.

In the second quarter of 2021, Nigeria paid an interest fee of $306,050, without paying the principal fee, as debt service to the Exim Bank of China in the second three months of 2021

The PUNCH had reported that Nigeria spent $591.11m in five years on servicing the debts owed to the Exim Bank of China.

Twitter Agrees To FG’s Conditions, To Resume Operations In Nigeria