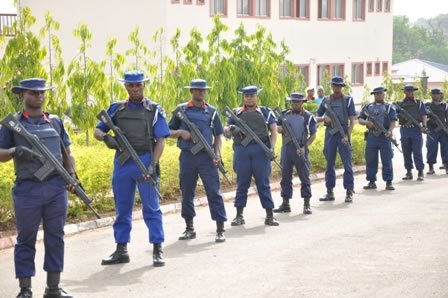 The Cross River State Command of the Nigeria Security and Civil Defence Corps (NSCDC) has said it was investigating the shooting of a man near its office in the state.

It was gathered that the labourer identified simply as Nwa-Aba was urinating opposite the office of the corps in Calabar, the state capital.

Tracknews Online understands that the officer who fired a gun at the 32-year-old man is yet to be identified at the time this report was given.

It was reported that Nwa-Aba was shot twice in his waist while relieving himself about 50 metres away from the NSCDC office.

“He was urinating at a spot when the Civil Defence officer shot him in his waist. He is a labourer at the Petroleum Tanker Driver’s park. He has been rushed to the hospital and we don’t know his condition for now,” an eyewitness who spoke with Vanguard said.

Reacting also to the incident, one Bright Uzo who claimed to have witnessed the incident, condemned the shooting, saying the bullets could have killed Nwa-Aba.

He said: “Was he suspected of having any intention to commit a crime? They shot him before knowing that he was only urinating. Even if it was at their gate, he ought not to shoot him. He is not a criminal, he is just answering the call of nature.”

Tracknews Online understands the incident stirred an uproar in the city as residents stormed the office of the corps to demand justice for the victim.

Officials of the security agency, however, reportedly dispersed the protesters.

Confirming the incident to newsmen during an interview, NSCDC spokesman in the state, Solomon John, said the incident was being investigated.

“We came in this morning (Wednesday) to discover what happened because it happened in the early hours and only officers who were on night duty witnessed it. I can tell you that there is an ongoing investigation,” he said, adding that “the guy is okay” after being rushed to hospital.

Related Topics:NSCDC Officer Allegedly Shoots Man Twice For Urinating Near Their Office In Cross River
Up Next

Exclusive/ Otiotio Has No Moral Justification To Ask Questions On Governance___Jeremiah

WATCH VIDEO: How we invaded Justice Odili’s residence, by suspect