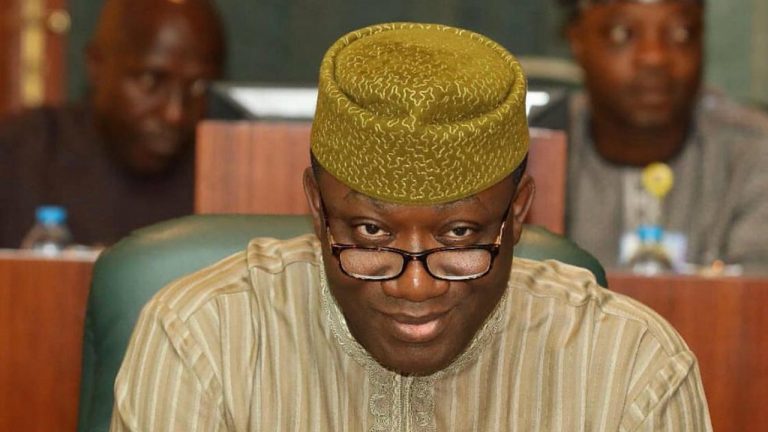 The Ekiti State Governor and Chairman, Nigerian Governors Forum (NGF), Kayode Fayemi has challenged the Attorney-General and Minister of Justice, Abubakar Malami (SAN) to allow the law to run its course over the move to pay some private consultants on the Paris Club Refund money.

The Governor who insisted that the issue of the $418 been claimed by the consultants in the Paris Club Refund is already before the court, wondered why the Minister of Justice wants to effect the payment in a rush without waiting for the pronouncement of the court.

Fayemi argued further during his Thursday appearance on Arise TV that the consultants are only out to fleece Nigerians.

He said the claims by the consultants are fraudulent while those advising President Muhammadu Buhari on the matter are majorly misleading him.

“It is befuddling that the attorney general of the federation is pushing vehemently on the side of people whose primary intent is to fleece the Nigerian people,” Fayemi said.

“One of the ways in which the Governors’ Forum at the time tried to address it was to call for all the cases that are in court and all the claims that are been made by consultants and reviewed them.

“This review was carried out. The attorney-general requested for information on this.

“This information was passed to him and at the end of the day, $350 million was approved by Mr. President as full and final settlement and some of these funds went to people who are now back to the attorney-general claiming for ‘$419 million’.

“So if in 2017, a certain amount of money had been approved as full and final payment, where did this $418 million come from?

“I suppose, that is the question that the court needs to help unravel.”

He added that he has made the views of the Governors known to the President on the matter both in writing and physical discussion.

He insisted that the matter needs to be subjected to a forensic audit to determine the purpoted roles played by the alleged consultants and if any fee should accrue to them.

“In 2017, when the president of Nigeria graciously agreed to pay the refund that was inappropriately deducted from the state and local government, many of these people came out of the woodworks and they were blocking the receipt of these funds by states,” Fayemi stated.

“What is happening now is just a continuation of this sleight of hand and that is what the governors are challenging,”

“We have been very clear that these claims to the best of our knowledge are fraudulent and they should be subjected to a forensic audit if states are found to be liable on account of the purported consultancy allegedly offered and delivered by these people.”

Meanwhile, President Muhammadu Buhari has in September 2021, directed that the payment of $418 million to consultants over the Paris Club refund should be suspended.

Naija News understands the President instructed the Ministry of Finance to put the payment on hold “until all the cases are exhausted”.

This online news platform recalls the federal government of Nigeria was in 2006, able to get an $18 billion debt write-off by the Paris Club of international creditors.

However, because the money was taken from the federation account which belongs to the three tiers of government while the debt was only owed by the central government, the federal government had to make refunds to the state and local governments.

But along the line, some consultants and contractors who claimed to have facilitated negotiations between the federal, state, and local governments for the refund or executed certain projects demanded to be paid some percentage of the fund for their alleged roles.

This degenerated into a controversy as the Governors declined and asked for a forensic audit. Previous federal government administrations also refused to grant approval for the payment.

The contractors on their part took the legal route and took the matter to court.

Related Topics:Fayemi Tackles MalamiParis Club Refund: Why Are You In A Hurry?
Up Next