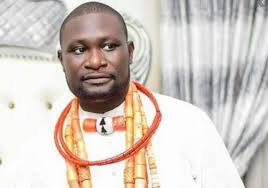 The police is set to arraign Chief Ayirimi Emami before a Warri Chief Magistrate Court this today on the allegation of conspiracy, burglary and theft.

Ayirimi Emami who was stripped of his title of Ologbotsere of Warri Kingdom by the new Olu of Warri, His Majesty, Ogiame Atuwatse III was informed by the police in a letter from the Assistant Inspector General of Police, AIG Zone 5 to avail himself unfailingly at the court.

In the letter dated November 22, 2021, he was warned that failure to be present would be regarded as contempt of the court. He was also warned to provide sureties should he be granted bail failing which he could spend the night in prison.

www.tracknews.ng gathered that the arraignment referenced in Case File No: CR630/2021 with Commissioner of Police Vs Chief Aririm Emami flows from the invasion of the palace of the Olu of Warri earlier in the year.

www.tracknews.ng reports that Ayirimi Emami had denied his culpability in the invasion of the palace saying he was out of town when the incident happened.

“I was actually invited based on the invasion of Olu’s palace which I told the police I have nothing to do with it because I was not in town when the incident happened,” he said last April following an earlier invitation by the AIG Zone 5 over the invasion.

However, the letter asking him to be present at the Chief Magistrate’s Court for arraignment on Wednesday, November 24, 2021 read thus:

Be informed that the above mentioned case of Conspiracy, Burglary and stealing in which you are an accused/defendant will come up in the Chief Magistrate’s Court Warri, Delta State on the 24th Day of November, 2021 at 9.00 a.m for arraignment and hearing.

You are requested in your own interest to attend the said in time with at least one person to be your surety if you are granted bail. Your surety or sreties must have with him/them original and photocopies of Tax clearance certificates of receipts for past three years.

Failure to attend the said court will tantamount to contempt to court and your coming to the court without at least one would be surety will result your being remanded in Prison custody with its marianips, inconveniences and embarrassment.

The arraignment by the Police of Ayirimi Emami over allegations of theft and burglary is another dimension to his position on the emergence of the new Olu of Warri.

Related Topics:Burglary And Theft.Police Set To Arraigne Controversially Warri Billionaire Ayiri Emami On Charges Of Conspiracy
Up Next