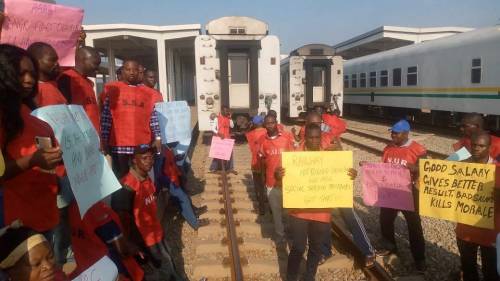 The workers demanded increased salary and better welfare package during a protest at the Idu Station in Abuja.

Workers of the Nigerian Railway Corporation (NRC), on Thursday, protested their poor monthly remuneration pegged at N26,000. The workers demanded increased salary and better welfare package during a protest at the Idu Station in Abuja.The workers were seen gathered at the train station armed with placards with different inscriptions which include “Good salary gives better results, bad salary kills morale.” Abuja Train Attack, a terrorist’s Attack say it as it is MD NRC.” One of the aggrieved drivers said the protest was necessary especially as the Dangote company pays truck drivers N300,000 while locomotive drivers are paid N26,000 by the Railway Corporation. He added that the NRC had beautiful modern infrastructure but zero welfare for workers.The President-General, Nigerian Union of Railway Workers (NURW), Innocent Ajiji said, railway staff were the most poorly paid among all the parastatals in the Ministry of Transportation.
He said, “It will interest you to know that our minimum wage is N30,000, so when you deduct contributory housing scheme, pension, union dues and tax, the salary drops down to N26,000.“And that’s the take-home of the railway workers, no allowance, nothing. That’s why we have decided to embark on this protest.“It will interest you to know that our passengers that are riding on our train are insured, every good that we carry on our train is insured, but funnily enough, those operating the train are not insured. “You could remember that four weeks back, there was a bomb blast on the train tracks if something had happened to those drivers, I am assuring you that the only thing that government would have paid them is expenses allowance which is less than N1million, so we are demanding that our workers be insured so that if anything happens to them, the company will pay the next of kin a reasonable amount of money.“We demanding that our standard of working condition should be reviewed,” adding that the review of railway workers welfare is supposed to be done every five years but was done last in 1978 and implemented in 1983.”The NRC had earlier ordered the suspension of train services between Abuja and Kaduna, Lagos and Ibadan, and Warri due to a strike. The district managers were directed to be prepared to shut down train stations plying Abuja-Kaduna, Lagos-Ibadan and Warri-Itakpe routes in the event that workers down tools.The Managing Director of NRC, Fidet Okhiria, in an internal memo on Tuesday alerted all district managers and key personnel about the necessity to preserve railway assets if the strike goes forward.The warning strike that was declared to demand increased wages and condition of service by workers of the Nigerian Railway Corporation (NRC) is to hold from November 18th to November 20th.