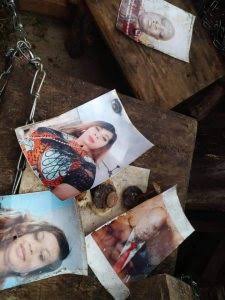 The picture of River State Commissioner for Special Duties, Onowu Emeka Anyasodike was discovered in a shrine in the Ahoada area of the state alongside others.

Among other items found in the shrine are pictures of unidentified women and other men at the shrine which is allegedly owned by a Delta State indigene living in the state.

Sources say the picture was discovered after an angry mob raided the shrine and arrested the chief priest for allegedly burying a 3-year-old baby alive.

Reports say the chief priest disappeared while confessing to the crime, after the little girl was dug out from the grave.

An Eyewitness said the attempt by the mob to set the shrine and the house of the priest ablaze proved abortive.

Related Topics:Rivers State Commissioner’s picture found in a shrine
Up Next