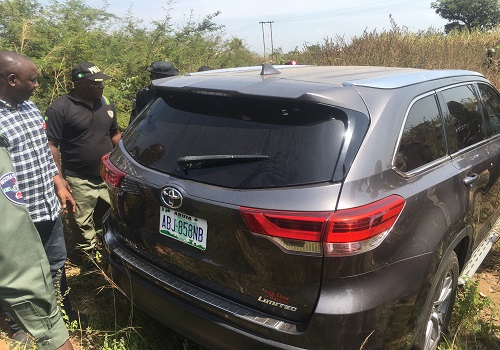 Kaduna State Government and the security forces have confirmed bandits killed one person and abducted an unspecified number on Kaduna-Abuja highway Sunday evening.

The security forces led by the Kaduna Commissioner Internal Security and Home Affairs, Samuel Aruwan, Commissioner of Police, Mudasiru Abdullahi and Garrison Commander 1 Division Nigerian Army, Brig-Gen. Uriah Opuene, who led a patrol of the highway on Monday, said 11 victims were rescued during the kidnap attack.

Bandits on Sunday attacked several motorists on the highway, and killed a former governorship aspirant in Zamfara, Alh Sagir Hamidu before kidnapping an unspecified number of people during the operation.

At the scene of the attack, a Sport Utility Vehicle (SUV) belonging to the deceased victim was recovered by the security operatives.

Our correspondent observed that the SUV was shot like six times by the bandits.

Addressing journalists at the scene of the attack at Kurmi Jema’a, Police Commissioner Mudassiru Abdullahi confirmed one person was killed and others kidnapped.

Aruwan described the incident as disturbing and assured that the government has deployed four additional Armoured Personnel Carrier (APC) as a measure taken to boost security along the highway.

‎On the shutdown of telecommunication services, Aruwan said it is not a deliberate policy to hurt the people but an action taken to enhance security in the State.

Related Topics:scores kidnapped on Kaduna-Abuja highwaySecurity operatives confirm one killed
Up Next

N250m: We Have So Many Orphans In Northern Nigeria — Group Tells Davido