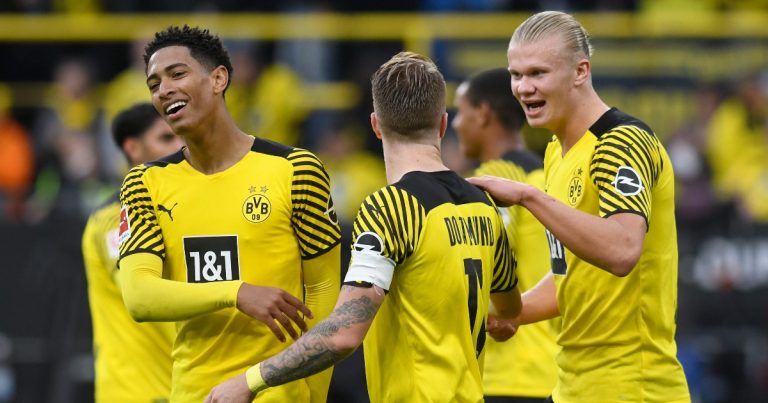 Ole Gunnar Solskjaer’s treatment of Jadon Sancho could prevent a Borussia Dortmund star from moving to Old Trafford next summer, according to a report.

Sancho, 21, left Dortmund in July to complete a dream transfer to Man Utd. The Red Devils had pursued him for over a year and eventually forked out £73million for his services.

Sancho had become one of the hottest properties in Europe with his electric performances in the Bundesliga. He would manage 50 goals and 64 assists during 137 appearances for Dortmund.

But his time under Solskjaer has been more than underwhelming. The right winger is yet to complete a full 90 minutes in the Premier League this season, or open his goalscoring account.

Lacklustre performances against Leicester and Man City haven’t helped his cause. Sancho faces a tough task to replace the likes of Mason Greenwood or Marcus Rashford in Solskjaer’s plans.

Eurosport now provide an intriguing report on Sancho’s struggles, and how they could impact his team’s transfer strategy heading into 2022.

They write that top striker Erling Haaland is being put off the idea of joining Man Utd. He has seen Sancho’s transformation from top winger to benchwarmer happen in just a few months.

The treatment of his former team-mate is a clear ‘red flag’ both for Haaland and his entourage. It is ‘unfathomable’ to the Norwegian that he may be kept on the bench for big games, or gradually eased into the team.

Haaland is also wary of the constantly-evolving managerial situation. Solskjaer has been under significant pressure ever since the 5-0 thrashing by rivals Liverpool in October.

Brendan Rodgers is a potential successor, but Haaland does not want to join Man Utd at such a turbulent time.

These factors could push Haaland away from Old Trafford and into the hands of Chelsea, Man City or Liverpool. Bayern Munich and Paris Saint-Germain are also interested in the goalscorer, although Real Madrid have ended their pursuit.

Solskjaer was slammed at the weekend after reports revealed he had been playing Sancho as a wing-back training.

Pundit Danny Mills said on the matter: “Good luck turning him into a wing-back. He didn’t play for England too much in the Euros because I don’t think he was reliable enough to track back and do the defensive side of it. Dortmund never played him there.

“You bought a winger who is going to create chances and score goals. Suddenly you’re going to play him at wing-back in an unbelievably leaky defence. It’s like, really? That’s almost a sackable offence in itself.”

Sancho will be praying he gets another chance to start this weekend. United travel to Watford on Saturday at 15:00.

Related Topics:Solskjaer to blame as ‘red flag’ emerges which could jeopardise major Man Utd deal
Up Next

‘It depends on him’ – Xavi reveals plans for Newcastle-linked star