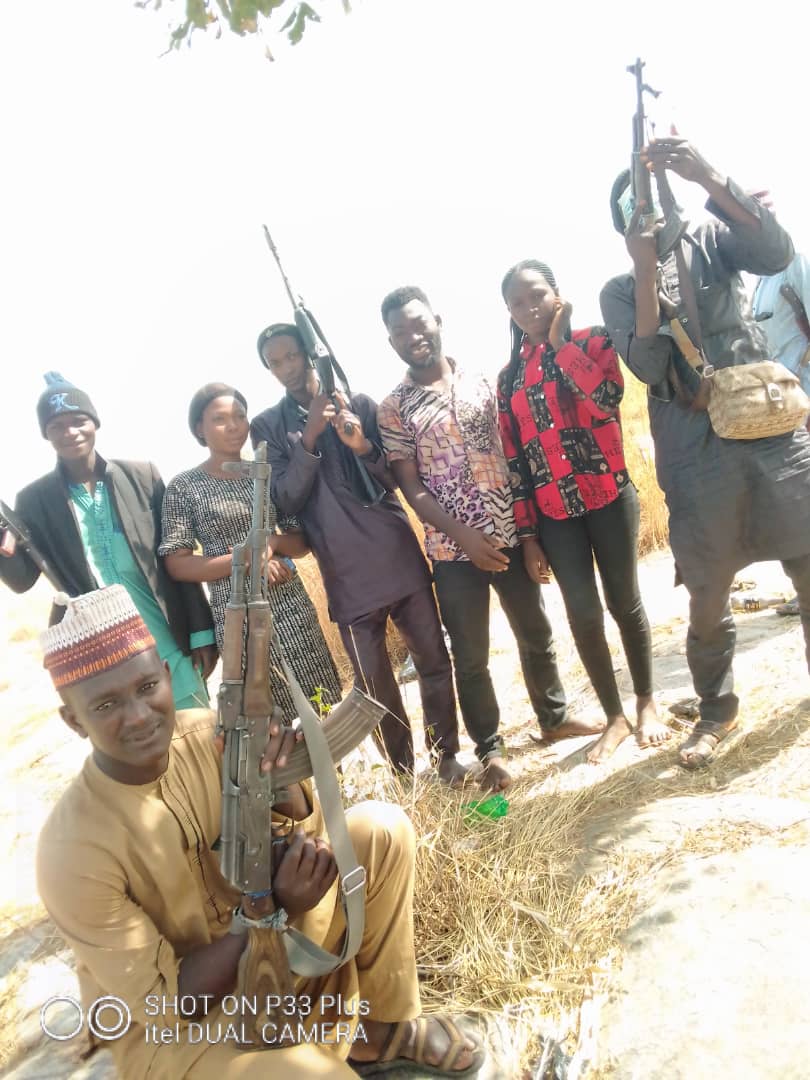 Immaculate Kondo, a 200-level undergraduate of Usmanu Danfodiyo University , Sokoto (UDUS), will never forget Tuesday 19th October. It was the day she was supposed to arrive school but that night she found herself stuck in the den of kidnappers.

She left Benue with 8 other passengers that morning in an 18–seater bus. By 6 pm somewhere around Tsafe, Zamfara state, some armed men, flagged down the vehicle and ordered every passenger to get down. They were all herded into the bush, except the driver and one other passenger who escaped.

“I remember they were 7 of them and they were dressed like soldiers. They were heavily armed. They stopped our car and ordered all of us to get down. Initially, I assumed they were just robbers so I intentionally did not come down with my phone. But to my shock, they herded us into the bush on bikes.

“One of the passengers ran away. He was the last person to get down from the bus. As soon as he got down, he took to his heels. But the driver stood by the car. And he wasn’t taken along with us. I suspect that he worked as an informant to the kidnappers,”Immaculate alleged.

Armed gangs, popularly referred to by government officials and local media as “bandits”, have been terrorising north-west Nigeria with robberies and kidnappings. The Economist reports that In the first nine months of this year some 2,200 people were kidnapped for ransom, more than double the roughly 1,000 abducted in 2020.

That night marked the beginning of a one week horrific experience for Immaculate. The kidnappers drove their victims into bush for about 2 hours until they stopped by the bank of a shallow river which everyone must cross by foot.

“When we got to the river I thought they would kill us there but they commanded us to cross it. We crossed to the other side by foot and were taken to another location. It took us 3 hours from the river to get there,” she said.

On the first night of captivity one young man managed to escape. When Immaculate and others tried to follow suit, the men who watched over them woke up. The next day, the legs of the kidnapped victims were chained so that they would not escape.

Immaculate and others were fed with nothing but stale bread. Sometimes, the kidnappers would shoot into fear to invoke fear inside the minds of their victims. Immaculate would cry and wish that she would make it out of that condition alive.

On Wednesday, negotiations for their release began. Despite the shut down of telecommunication in Zamfara, the bandits were still able to call the families of the victims.

The Nigerian Communications Commission (NCC) had directed telecommunications operators to shut down services in Zamfara, Katsina, and Sokoto states as part of fresh measures to contain banditry in the states. While the shutdown was total in Zamfara, phone services were shut down in at least 13 local government areas of Katsina and 14 local councils in Sokoto. However, the shutdown his proven to be ineffective because the menace of banditry still rages on.

“In the morning, they took us to a place where the network was good so that they could negotiate with our families. It took about two hours to get there on bike. It was a very long journey.

“The bandits told us that the six of us must bring N20m or else we would all be killed. However, we pleaded with them. We told them that we cannot afford that kind of money. Eventually, the ransom was pegged at N12. Each of us was to pay N2m” she said.

The bandits, to avoid been tracked, used the phone of a kidnap victim to put calls through to the families of all the victims. The next day, which was Thursday, the victims were forced to call their families for the money again. The victims were told to tell their families that the money must be ready by Sunday. However, the families of the victims insisted that N12m was too much. The ransom was eventually pegged at N9m. That is N1.5m per victim. The ransom was paid cash on Tuesday the following week by a driver who was sent to the bush by the families of the victim and by 6pm everyone was released. Exactly one week they were kidnapped.

Jennifer Iorliam and Joseph Aondona were among those whisked into the bush alongside Immaculate by the terrosts. Both of them, members of the National Youth Service Corps, were on their way to the NYSC Orientation Camp in Kebbi State. They were supposed to board another bus from Sokoto to their destination in Kebbi State but their journey came to a stop when their vehicle was intercepted around the Tsafe Local Government Area of Zamfara State.

Just like Immaculate, Jennifer assumed that the armed men were robbers but she was wrong.

“I was scared because I thought the were going to rob us and free us but I became more scared when they started taking us in a deep bush.
“How ever I believed that I was going to make it out alive because I knew God won’t abandon me,” she said.

Joseph Aondana narrated that they we were not treated right in the camp.

“The condition was deplorable. The food and water we were drinking were terrible,” he said.

‘They Touched Our Breasts’

Banditry and sexual assault are intertwined. Bandits do not only kidnap, maim or kill their victims. They also try to rape them.

Immaculate Kondo and Jennifer Iorliam confirmed that though none of the victims were raped, they were sexually assaulted.

“On our way to the river I was placed on a motor cycle between two armed men. One was riding while the other was behind me. The one behind me fondled by breasts and touched my buttocks as we moved.

“Even when we were chained inside the bush, some of kidnappers tried to rape us but their boss ordered them not to do so,” she said.

“Yes, some were touching our breast,” answered Jennifer Iorliam when this correspondent requested to know if they were at any point abused.

Immaculate alleged that the bandits who kidnapped her are very known to the members of villages they operate in. She said that sometimes some villagers would pass by and see them chained but would act indifferent. This reporter quized her to recalled the name of the village she was held captive but she couldn’t remember it.

“I can’t remember the name of the village but I can swear that the villagers are aware of what is going on and they seem to not care. Probably, they’re benefiting from the crime. Sometimes some villagers would pass and see us chained, they would see the guns in the hands of the kidnappers, but they would pretend they saw nothing unusual.

“The bandits told us that even if manage to escape we may not make it out if the village because there are so many criminal groups around. We may be so unlucky to fall into the hands of another kidnap king pin,” she said.

The Impact of Banditry In The Lives Of Victims

Immaculate Kondo is still traumatised. The scars of the horror and shock that pieced her when she was kidnapped are still etched on her memory. She has resolved never to go back home until she graduates from school.

Abubakar Kabiru, a lecturer and security expert with the faculty of Education at Usmanu Danfodiyo University urged students and corps members to be security conscious when travelling.

“The problem of banditry has gotten out of hand. Areas like Zamfara, Kebbi and Sokoto are very dangerous now. It is very unwise for anyone to travel in the evening in such areas. Students and corps members must be very be careful,” he said.

Ak Tsafe believes that though the government has been trying to end banditry through kinetic and non kinetic means, it needs to do better.

“Government is claiming to be doing enough, but it needs to do more,” he added.

Promise Eze is an avid editor and journalist.

Related Topics:Special Report: One Week In The Den Of Kidnappers—Abducted Victims Share Ordeals
Up Next