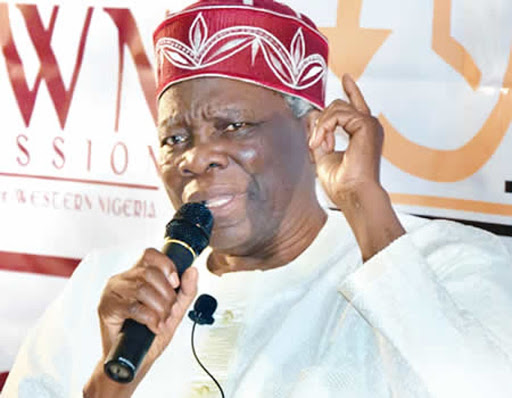 Gunmen have attacked the residence of the national leader of Ilana Omo Oodua, Prof. Banji Akintoye, in Ado-Ekiti, the Ekiti state capital.

The incident occurred a few months after Akintoye’s son residence in Agbor, Delta State was invaded by gunmen with property worth millions destroyed.

The Nation gathered that the assailants stormed the residence behind NOA supermarket, Similoluwa, Ado-Ekiti around 6:27 am on Saturday in Gestapo-manner.

An eyewitness, who craved anonymity, said that the masked gunmen, numbering six, went on shooting spree for about 20 minutes after gaining access.

The source added the assailants loaded themselves in a blue Toyota Sienna vehicle, climbed the fence and shot sporadically into the building.

Adeleye, in a statement, explained the assailants climbed a plastic chair outside the gate and riddled the house with bullets, adding that nobody was hurt.

The statement reads: “The leadership of the umbrella body of Yoruba Self-Determination Groups, Ilana Omo Oodua (IOO), is displeased to inform the general public that the Ado-Ekiti country home of its leader, Professor Banji Akintoye, was attacked on Saturday, 30th October, 2021.

“Gunshots were fired into the house by assailants who apparently climbed a chair outside the gate to shoot. Luckily, Professor Banji Akintoye was not around at the time, and nobody was hurt.

“Bullets suspected to be from AK 47 rifles were recovered after they dropped from the ceiling onto the floor.

“The matter has since been reported to the Ekiti State Police Command for investigation.

“Recall that few months ago, unknown armed men invaded the house of the Scion of the Akintoye dynasty, Ademola, an Engineer, in Agbor, Delta state, exterminating the building, including his rich fish pond. The Police did not arrest anyone up till this moment.

“We the Yoruba people within, and beyond the horizon of Nigeria will hold the Nigerian Government responsible if any evil happen to our leader or any or his relations.”

Ekiti Police spokesman, Abutu Sunday, didn’t pick call to his mobile lines and was yet to respond to text messages as at the time of filing this report.