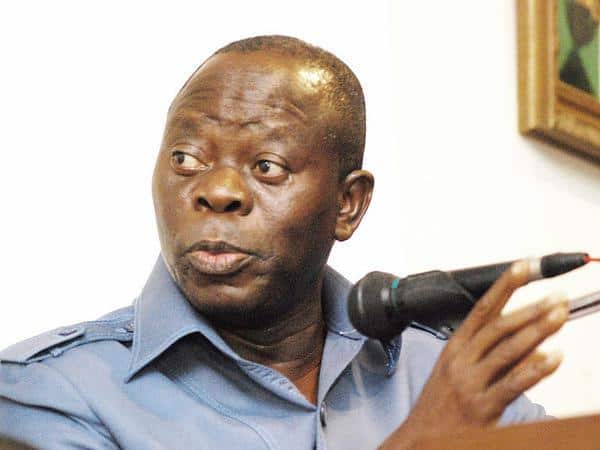 Former National Chairman of the ruling All Progressives Congress, Adams Oshiomhole, has applauded the outcome of the just-concluded Anambra governorship election.

TrackNews Online recalls Soludo emerged winner of the November 6 election with 112,229 votes to defeat Valentine Ozigbo of the Peoples Democratic Party, who got 53,807 votes, and Andy Uba of the All Progressives Congress who polled 43,285 votes.

In a statement signed by his spokesman, Victor Oshioke, on Friday, Oshiomhole congratulated Soludo for emerging victorious in the keenly contested exercise.

The APC chieftain stated that Soludo’s victory is indeed richly deserved given his impressive antecedents at the Central Bank of Nigeria (CBN).

Oshiomhole also commended Andy Uba and Valentine Ozigbo for providing a healthy contest and credible alternatives for the people of Anambra in the election.

The statement reads: “Dear Prof. Charles Soludo, I congratulate you on your victory in the Anambra governorship election concluded recently. It is indeed a victory richly deserved given your impressive antecedents.

“I pray that God give you good health, better understanding, wisdom, vision and more courage to build on the foundation laid by your predecessors to take Anambra State to an enviable level.

“May I also use this medium to congratulate my friend Dr. Andy Uba of the All Progressives Congress and Valentine Ozigbo of the Peoples Democratic Party for their good showing in the election. Democracy thrives best when there is healthy contestation and credible alternatives for the people to choose from. They both provided that choice creditably.

“Finally, I congratulate the good people of Anambra State for peacefully expressing their political preferences, thus further deepening democracy in our environment. It is my hope that the choice they freely and collectively made at the polls ultimately translates into a better life for them in the future.”

Meanwhile, the APC candidate has rejected the outcome of the election, saying that the poll was rigged and marred with different irregularities.

Uba has also served notice of his intention to challenge Soludo’s victory up to the Supreme Court.