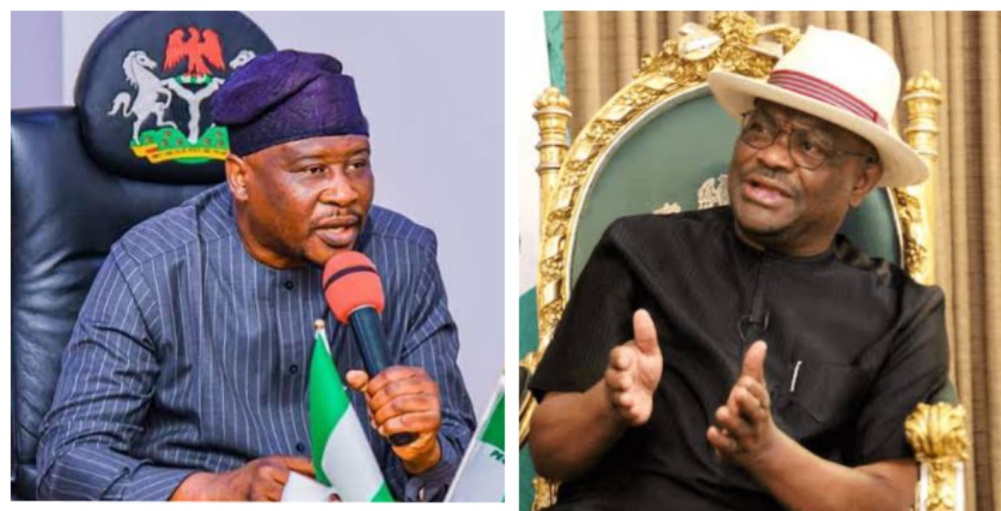 The Governor of River State, Nyesom Wike and his counterpart in Adamawa, Ahmadu Fintiri, has revealed the type of presidential candidate the main opposition party, the Peoples Democratic Party needs to field to seize power from the All Progressives Congress in 2023.

Governor Wike on his own part spoke on how the presidential candidate would emerge, while Fintiri stated the character and qualities the candidate of the party must-have.

The Special Assistant to Governor Wike on media, Kelvin Ebiri, in a statement said the PDP chieftains stated this during Wike’s visit to Fintiri at the Government House, Yola on Friday.

The River State Governor visited Fintiri to appreciate him for the successful conduct of the PDP Convention as the Chairman of the Planning Committee for the convention.

Wike further stated that stakeholders in the main opposition party would decide the presidential candidate of the party at the right time.

He added that people who had not participated in organising a party convention might presume it was an easy feat to accomplish.

He said: “At a time most people were expecting that it may not work out for PDP. It only did not work out well, it was peacefully conducted, the best ever conducted since PDP started.

“I believe that when people have done well, you commend them. When you give them another opportunity, they will put in their best. And that is one of the things I have come today to say my brother, you’ve done well with your people. You did not put us to shame.”

Wike added that when he and others nominated Governor Adamawa State as the chairman of the convention planning committee, they never had any reservation about his capacity to deliver a credible convention.

The Governor also used the occasion to shower encomium on Fintiri for his developmental strides in Adamawa State, particularly in Yola, the State capital.

He said: “How much does he get from the federation account yet he is able to judiciously put them into use for the interest and development of Adamawa State. If other people had done this within the city, he would have moved on to other areas that need attention. I want to plea to all of you to continue to give him the support.”

Fintiri while speaking on the successful conduct of the PDP convention said it has provided youths in the country an alternative platform to elect the next Nigerian president in 2023.

He charged the Rivers State Governor not to relent in his support for the party in the years ahead.

He said: “We are not just colleagues, we are not just in the same party, we have discovered ourselves to be good friends and even metamorphosing into being brothers. This is what we need in this country.

“That is why I am not a supporter of those who is calling for zoning of the presidency. I am for those that are calling for good candidates that can bring this country together, and improve on the potentials that abound in both the human and capital of Nigeria.

Related Topics:Fintiri Speaks On How PDP Presidential Candidate Will EmergeWike
Up Next

2023: I’ve Seen The Next President Of Nigeria – Babangida