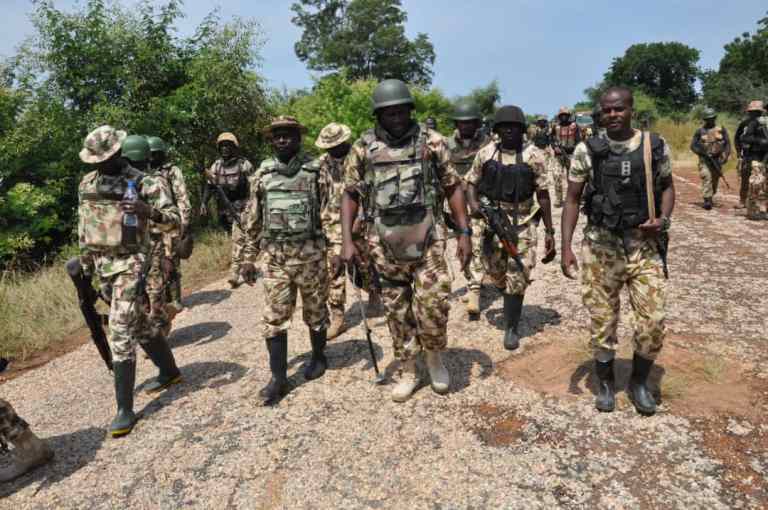 Troops of the Multinational Joint Task Force (MNJTF) comprising those from Sector 3 Monguno (Nigeria) and Sector 4 Diffa (Niger) have killed not less than 22 terrorists during a recent operation.

With backing from troops of OPERATION HADIN KAI, the soldiers launched a massive onslaught against Boko Haram/ISWAP terrorists in the Lake Chad region including Mallam Fatori town, and executed several of them.

Seventeen of the terrorists were arrested, many others also escaped with gunshot wounds while the troops recovered 8 AK47 Rifles and destroyed ten guntrucks, motorcycles, and logistic bunkers.

Tracknews www.tracknews.ng gathered that the operation wasn’t an easy ride for the soldiers as the terrorists mounted a counter-attack which resulted in heavy shootings as the insurgents also deployed Vehicle Borne Improvised Explosive Devices (VBIEDs).

Six soldiers including two officers lost their lives while sixteen others sustained various degrees of injuries.

The troops successfully cleared the hideouts of the insurgents in communities such as Arege, Gashigar, Asaga, Kainoa, Bana, Kamagunma, and others.

Speaking during a debriefing at the MNJTF headquarters in Diffa, Niger, Force Commander (FC), Maj Gen Abdul Khalifah Ibrahim of Nigeria commended the troops for their dedication and commitment to duty.

While paying tribute to those who paid the supreme price, Gen Ibrahim charged the troops not to relent until the insurgents are totally defeated.

The Deputy Force Commander MNJTF, Gen Abdou Assoumane (Niger), and other top commanders were also on the team for the debriefing, www.tracknews.ng reports.