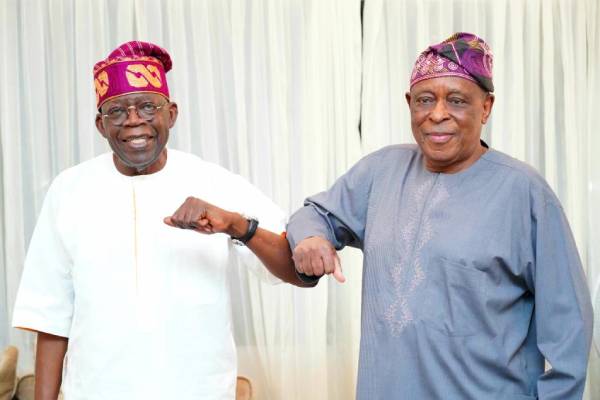 The National Leader of the All Progressives Congress Asiwaju Bola Ahmed Tinubu has paid a visit to the former Ogun State Governor, Olusegun Osoba, at his Ikoyi residence.

www.tracknews.ng reports that the former Ogun governor had recently returned from the United Kingdom.

Osoba, a chieftain of the ruling APC, had been in London were be underwent knee surgery just like the former Lagos State governor.

The visit by Bola Tinubu was to wish Osoba well after his return back to the country.

Aremo Olusegun Osoba was a former Governor of Ogun State between 1991- 1993 and between 1999-2003 first under the Social Democratic Party and under the Alliance for Democracy.