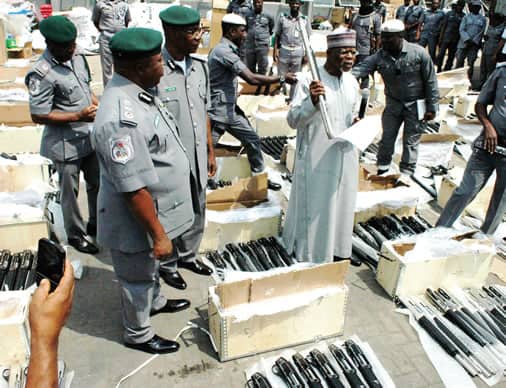 A container filled with arms and ammunition have been seized by officers of the Nigeria Customs Service attached to Tin Can Island Command.

www.tracknews.ng gathered that the container was intercepted on Friday during a routine check by some customs officers.

Speaking with reporters, spokesman of the Tin Can Customs, Uche Ejesieme, said the container was seized when the owner couldn’t give a satisfactory answer to the officers on duty.

Ejesieme said the owner claimed that the consignment contained electronics and other items.

He stated that the officers became suspicious of its content and upon close examination of the cartons discovered that they were filled with guns.

Ejesieme said that the service will conduct a thorough investigation into the matter with a view to unravelling the criminal gang behind arms importation.

He said, “The Command wish to confirm very categorically that during routine examination at the terminal B2 (Vehicle) of the TICT on Friday, 17th December 2021, our operatives stumbled on a suspected container laden with arms and possibly ammunition.

“But as we speak, what we have done as a command is that we have written to the terminal to evacuate the container immediately to enforcement unit for 100 per cent examination so that we can actually ascertain the quantity and other relevant information.

“So, as we speak, we expect the terminal to evacuate the container to the enforcement unit where we intend to strip it, and the quantity, names of people involved and other further information would be available.

“In line with service protocol, the command would inform the Customs high command in Abuja after the container had been thoroughly examined at the enforcement unit of the command.

“This is why we have not issued an official statement regarding the seizure. As we speak, we do not have full details of who is behind the import, the country of import and the model of guns. All these will be made known at the end of the investigations.

“Most times, the suspect you see is those freight forwarders and agents coming for examination, but we are more interested in getting to the importer and everyone involved in that criminal importation to nip it in the bud.”

Related Topics:Container Filled With Assorted Guns Intercepted In Lagos Port
Up Next