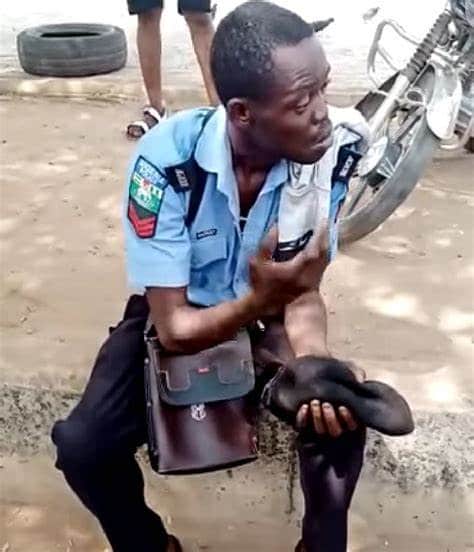 A policeman, Yemisi Opalola, who was allegedly caught on camera drunk, has been arrested by the Osun state police command.

Naija News reports that the security operative was taken into custody on the basis of indiscipline.

“The Osun State Police Command in its continued efforts to rid the Command of all forms of unethical behaviours, unprofessional acts and indiscipline, has identified, arrested and detained the police officer, Sgt Onatunde Joba that was drunk and whose video went viral.

“Investigation and disciplinary actions have commenced.

“The Commissioner of Police, Olawale Olokode, is using this medium to state that the stringent disciplinary action he would face will serve as a deterrent to other officers of his likes.

“The command under his watch will not tolerate or condone any act that is capable of tarnishing the image of the Force, or unbecoming of a police officer.”

In other news, unknown gunmen suspected to be kidnappers have again whisked away another monarch in Imo State.

The monarch was reportedly kidnapped on Wednesday around the Nkwo-Umuezeala market square in the village. Read more

Related Topics:Drunk Policeman Arrested In Osun
Up Next

My Money Mistake: I Stole My Wife’s Savings And Got Scammed