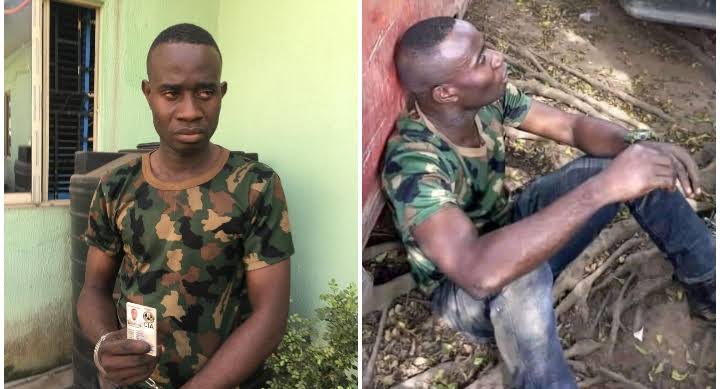 One Sunday James has been apprehended after parading himself as a military officer to oppress members of the public.

www.tracknews.ng reports that the suspect was nabbed in Edo State with a fake military identification card from the Civil Intelligence Agency.

He is said to have intimidated and oppressed residents and traders in Benin metropolis before his arrest.

POV boss explained that the suspect has been handed over to Oba Market Police Division for further investigation and prosecution, disclosed that he was arrested on December 7 following complaints from residents and traders in the area.

Osagie said; “Officials of PUWOV have apprehended one Sunday James for impersonating and parading as an officer of the Nigerian Army at the Oba Ovonranmen Square in Benin City. The suspect was arrested wearing military uniforms, with a fake identity card.

“His arrest followed a tip-off that the suspect has been presenting himself as a serving soldier in the area for a while, and has been intimidating and harassing residents, traders and others in the Oba Ovonranmen Square and environs.

“The suspect ran out of luck on December 7, 2021, when he went on with his normal business of harassing and intimidating residents on Camouflage T-shirt when he was apprehended by PUWOV officials.”

In another news, barely a month ago, a man in a military camouflage allegedly defrauded a Point-of-Sale operator of ₦100,000 in Lagos State.

The alleged soldier according to reports, had visited a PoS stand belonging to one Samuel Ayodele in the Ketu area of Lagos State to make a withdrawal.

In his narration, Ayodele said the soldier arrived at his stand on October 26, 2021, in a black Hilux to do a cash withdrawal.

Naija News understands that the said soldier requested the PoS operator’s account number to transfer the money into it.

However, after receiving Ayodele’s account number, the soldier reportedly showed him that the ₦100,000 had been debited from his account. Read On