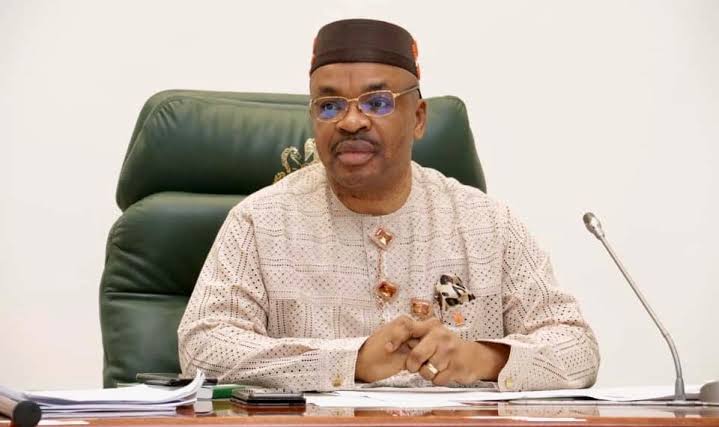 A schoolteacher and mother of two, Mrs Ufonabasi Inyang, narrates to PATRICK ODEY how she became a widow after a vehicle allegedly in the convoy of Akwa Ibom State Governor Udom Emmanuel killed her husband in 2015

Can you briefly tell us about yourself?

My name is Mrs Ufonabasi Inyang, widow of the late Christopher Inyang. I am a native of Utu-Ikpe in the Ikot Ekpene Local Government Area of Akwa Ibom State.

What do you do for a living?

I’m an NCE holder and a teacher in a private nursery and primary school here in Ikot Ekpene Local Government Area.

What happened to your husband?

It was on the 28th of January, 2015; my husband had gone out as usual to Uyo, the Akwa Ibom State capital, for a business transaction. After the transaction, he was standing by the road side along IBB Avenue, so I was told, in readiness to board a Keke NAPEP to the motor park, so that he could come back home, but since then, he’s nowhere to be found.

What do you mean?

I received a call in the evening of that day that he had an accident; that a vehicle in the convoy of Governor Udom Emmanuel knocked him down. From what I heard, the governor and his team were going for a political campaign at Eket Local Government Area in 2015. It was a government vehicle, so some drivers that were in the convoy took my husband to the hospital. I was later informed on the phone and directed to the hospital. I arrived at the hospital at Ukana Offot in Uyo by 9 o’clock in the evening. There I saw him (my husband); he was bleeding, his leg bone was broken and I was also told that he had internal bleeding. He was unconscious, but later he talked. When I asked him what happened, he said he could not tell what exactly happened.

Who was taking care of him in the hospital before your arrival?

The first time I went, I saw some government officials; they were so many and they assured me that they would come back the following day but nobody came again.

I wasn’t myself; I wept all through because his condition had become worse. I made so many calls and finally, one man called Elijah, who is now one of the Special Assistants to Governor Udom Emmanuel, assured me that he was coming. I kept calling him but he didn’t come. Around 3am my husband died. I cried, shouted and called the man, Elijah, again; he came and saw the whole thing. He consoled me and my children and my husband’s corpse was taken to the mortuary where it was embalmed. This person (Elijah) was around all through.

The man consoled me and promised that the government would give me a job and that my two children would also be given scholarships. But till today nothing has been done.

Do you mean nothing has been done by the government?

It was only during the burial time that the SA did everything and also gave me N100,000 for my house rent, to relocate to a cheaper place. Right now I’m in debt; my husband was the breadwinner. The first two years, the SA used to talk to me and he also paid my children’s school fees. But later on, whenever I called him, he would tell me that things were hard.

Last year, when there was recruitment into the state civil service, I called him again and he asked me to forward my name and number to him for employment into the state civil service. I did that and on the following day, I called him repeatedly on phone but he didn’t pick the call. When he later picked my call, he shouted at me. So, I’ve stopped calling him since then.

What do you intend to do now?

I don’t know what to do; I don’t have anybody to fight for me. I will be very grateful if government can do something for me and my children.

What was your husband’s occupation before he died?

He was a businessman, a contractor, a consultant and supplier of so many things; he traded in everything.

What do you really want the state government to do for you?

I don’t have a place to live in; recently I had a court case with my landlord because I could not pay my bills; I have no good job; I’m suffering; I need a job and I also want my kids to go to school. It has got to the point where it is difficult for us to even feed. I am a widow and I am suffering. I need them (government) to compensate me.

Related Topics:I’ve been abandoned to suffer after vehicle in Governor Emmanuel’s convoy killed my husband – Akwa Ibom schoolteacher
Up Next

THE BATTLE FOR JUSTICE: SYLVESTER WAS BEATEN TO DEATH