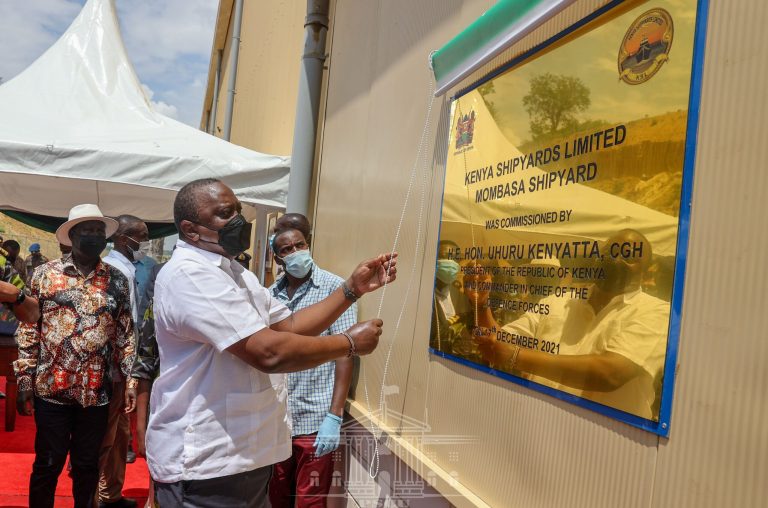 Kenya has unveilved the largest shipbuilding station in Sub-Saharan Africa, seen as a game changer in the country’s emerging ocean and blue economy.

The modern shipyard is located at the Mtongwe Navy base in Mombasa, making it the first country in sub-Saharan Africa with such a facility.

Kenya Shipyards Ltd (KSL) has the capacity to handle vessels of more than 4,000 tonnes and 150 metres and will boost the East African country’s status as a maritime hub.

The new facility has the longest slipway, a platform on which ships are secured and winched out of water into a working area for construction, repair, refitting and maintenance.

The Navy project in Mtongwe gives Kenya a competitive advantage in shipbuilding and maritime engineering in eastern and central Africa, with the inauguration of a marine academy in Kisumu helping to boost human resource training for sustainable growth of the industry.

“In the project, Kenya, which owns about 17 military ships, seeks to save $6,800 million per vessel in maintenance fees every 10 years considering that since independence, all Kenyan ships have been serviced and maintained overseas, either in Spain or Netherlands. Every ship has a lifespan of 10-15 years before a full makeover,” says a notice from the Kenya Defence Forces.

Host Governor, Ali Hassan Joho, said that: “We are surely on track and making great strides towards achieving full potential in the blue sector economy.’

KSL will for the first time in Kenya’s history employ its own certified ship welders, which is part of the Kenyan government’s agenda to create over 10,000 jobs per year in the maritime sector, considering all ship welders in Kenya are foreign.

KSL is the anchor industry for the blue economy and will provide civil and modular infrastructure workshops, slipways, jetties, bridges and others required to support the maritime industry.

Kenya has already formed a full department on the national blue economy, which will require specialised vessels such as deep sea fishing in the exclusive economic zone, where vast untapped marine fisheries resources are found.

Ship construction in Kenya is not a new concept. The country built its first vessel – the MV Uhuru II – at the Kisumu port more than 70 years ago.

This is an example of how improving shipping and maritime infrastructure is a key component in Kenya’s economic roadmap, by harnessing maritime resources to propel its industrialisation agenda under Vision 2030.

The global maritime trade value is worth $14 trillion, of which 40 percent, worth $5.6 trillion, passes through the east coast of Africa. This means that Kenya will for the first time have the chance to access $ 5.6 trillion of the trade that takes place in this region of Africa by ensuring ships pass through Kenya to undergo repair and maintenance.

Related Topics:Kenya Opens Largest Shipyard in Sub-Saharan Africa
Up Next