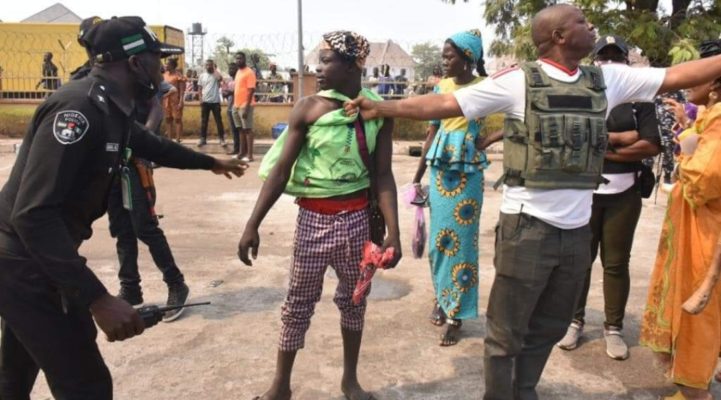 Mr Idriss claims those carting away goods were staff of the supermarket salvaging their products from the raging fire.

Abbas Idriss, the Director-General of the FCT Emergency Management Agency (FEMA), says those seen carting away goods from Next Cash & Carry supermarket on Sunday were the mall’s staff and not looters.

Peoples Gazette had reported how looters thronged the supermarket to pillage it while the facility went up in flames Sunday morning.

But Mr Idriss denied the looting despite evidence.

“Immediately the agency got to the scene of the incident, security operatives cordoned the area and fire fighting began.

“There was no looting whatsoever as speculated by some people on social media.

“What we saw on social media was staff of Next Cash and Carry trying to salvage goods using trolleys. Nothing was taken out of the premises by looters,’’ Mr Idriss stated.

He commended all responders, security agencies and the media for their prompt response to the fire incident.

According to him, immediately FEMA received the distress call on the fire incident, it activated all responders, including the Federal Fire Service, FCT Fire Service and FCT police Command.

“Others are the Department of State Services, the Nigerian Security and Civil Defence Corps, the National Emergency Management Agency, the armed forces, Julius Berger, the NNPC, and other private corporate entities,’’ he stated.

Mr Idriss added that the rescue effort was well coordinated, leading to the containment of the fire.

He reaffirmed that no life was lost to the incident and neither was anyone injured.

Mr Idriss appealed to business owners to factor in risk elements in their business plans, noting that fire engines did not get free access within the shopping mall while the fire raged.

Related Topics:‘Looters’ of burnt Next Cash & Carry supermarket are staff: FEMA
Up Next