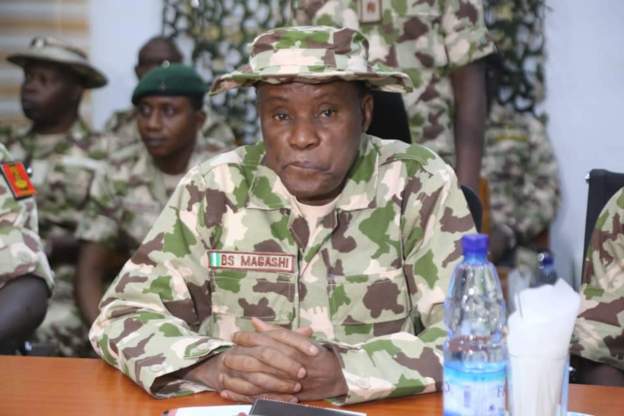 Two hundred and thirty-five officers of the Nigerian Armed Forces have been promoted to the next rank of military generals.

www.tracknews.ng gathered that of the 235 officers, some got promotion as one-star generals while others became two-star generals.

The approval for their promotion was given on Tuesday night after a meeting of the Army Council, Navy council and the Air Council respectively held at the ship house Ministry of Defence in Abuja which was presided over by the Minister of Defence, Bashir Magashi.

The Army Director of Defence Media Organization( DMO), Benard Onyeuko is among those freshly promoted as Major Generals.

In a related development, the Police Service Commission (PSC) on Tuesday approved the promotion of the Commissioner of Police, Lagos Command, Hakeem Odumosu, and five others to the tank of Assistant Inspector General of Police.

This was made known in a statement to newsmen by the PSC spokesperson, Ikechukwu Ani.

A former Deputy Commissioner of Police (DCP) in-charge of the Lagos State Criminal Investigation Department (SCID) Yaba, DCP Yetunde Longe, alongside 16 others were promoted to the rank of CPs.

According to the PSC, the two AIG’s promoted to DIGs are AIG Zaki Ahmed and AIG Johnson Babatunde Kokumo.

Related Topics:Nigerian Military Promotes 235 Officers To Generals
Up Next