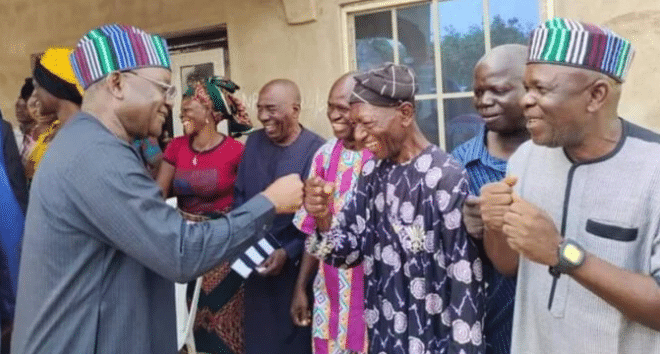 Governor Samuel Ortom of Benue State has narrated his experience as a bus conductor in Gboko Motor Park in 1980.

Ortom stated he decided to become a bus conductor after he dropped out of primary school due to financial constraints.

The governor disclosed that following the unfortunate incident, Mnenge Mtenave invited him to work as a motor conductor and also taught him how to drive.

He asserted that his former boss was nice to him during his time as his conductor, adding that Mtenave made him a cashier and treasurer of all the money that was made weekly.

Ortom made these known on Tuesday during a visit to his former boss at his residence in Mbadim, Gboko Local Government Area of the state.

The governor stated that he came to celebrate Christmas with Mtenave and other commercial bus drivers whom he worked with at Gboko Motor Park.

Ortom said he decided to visit Mtenave and celebrate Christmas with him to show appreciation for the “foundation” that was laid for him.

The governor reportedly presented a Hilux van to Mtenave and promised to support him in any trade of his choice.

This is at the Governor argued that his supporters criticizing his move to forgive the All Progressives Congress (APC) chieftain are not his true supporters.

Obaseki made the submission on Tuesday while addressing leaders of the People’s Democratic Party (PDP) in Oredo Local Government Area of the state over the reactions that followed his decision to forgive Kabaka and give him Christmas gifts.

Addressing the issue on Tuesday, Governor Obaseki said humility and forgiveness should be the hallmark of any politician and it must always be remembered that humanity comes before politics.

Related Topics:Ortom Narrates His Experience As A Conductor In 1980
Up Next