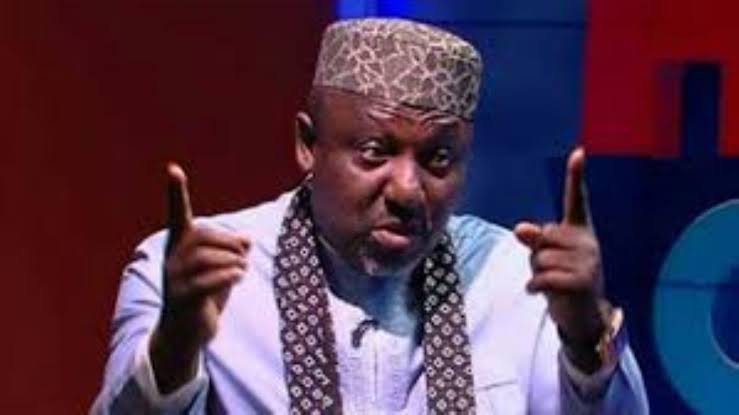 Okorocha, who lamented the arrest said there was no arrest warrant or invitation before the policemen stormed the church where Nwosu was arrested on Sunday.

Aformer Governor of Imo State, Rochas Okorocha, on Sunday, said his successor, Governor Hope Uzodinma must have lied against him and his family for the Inspector-General Of Police, Usman Baba to have ordered the police to arrest his son-in-law, Uche Nwosu.

Okorocha, who lamented the arrest said there was no arrest warrant or invitation before the policemen stormed the church where Nwosu was arrested on Sunday.

Okorocha who briefed journalists at his Spilbat mansion in Owerri, the state capital, alleged that the state governor, Uzodinma, deceived the police IG, Baba, into desecrating the church of worship by arresting Nwosu.

The former governor claimed the state government wanted to frame Nwosu because of his “non-performance.”

Okorocha said Uzodinma had not hidden his bitterness against him and the members of his household.

The senator said that he was waiting for the governor to name the sponsors of the insecurity in the state on January 3 or take responsibility for the killings in the state.

Okorocha urged the police to free his son-in-law or take him to court within the next 24 hours as enshrined in the constitution.

He also said that though the Commissioner of Police in the state, Rabiu Hussaini, had confirmed that Nwosu was being held in police custody, he had yet to establish contact with his son-in-law since he was arrested.

He said, “Uche Nwosu, my wife and daughter were at the church for an outing service, when a group of men in police uniform started shooting while the sermon was ongoing.

“In the course of their activities, they pushed down my wife and tore my daughter’s clothes. No warrant of arrest. No invitation. We suspected kidnapping at first. Many people were injured while running. Uche Nwosu was dragged into a bus carrying Imo State Government number plate.

“They were identified as policemen from Imo State Government House by their colleagues attached to Uche for the burial (of his mother). I got the CP who said that the IGP approved his arrest.

“The shock of such an arrest without a warrant and humiliating members of my family is unfortunate. Most security operatives in Imo know nothing about the arrest. I don’t know what they framed up.

“The IGP could only do this on high-level misinformation from Hope Uzodinma. Over 100 gunshots to arrest Uche Nwosu. What kind of ruthless behaviour on an innocent citizen of Nigeria?

“Uzodinma wants to frame me up by all means. Uzodinma has to answer for most of the activities going on. Uzodinma must mention the names of those who are responsible for insecurity in Imo State or he should be held responsible for all the killings in the state.

“Uzodinma has framed up something against Uche Nwosu. Buhari should be informed about what is happening in Imo State. Hundreds of citizens are being killed in this state.”

Related Topics:Nwosu – OkorochaPolice Officers Assaulted My WifeTore My Daughter’s Clothes While Arresting My Son-in-law
Up Next