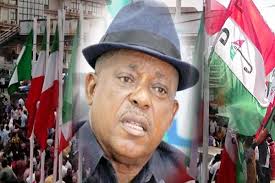 The Uche Secondus-led National Working Committee of the Peoples Democratic Party, will on Wednesday, hold its valedictory session.

gathered in Abuja, on Friday, that the session which barring any last-minute changes, will be held at the PDP National Secretariat, is to provide an opportunity for outgoing members of the NWC to review their activities and put finishing touches to their handover notes.

Secondus is unlikely to attend the event because of a subsisting court order barring him from parading himself as national chairman.

The tenure of the outgoing NWC officially ends on December 9; the Iyiochia Ayu-led incoming administration takes over on December 10.

While confirming the valedictory session, the outgoing National Publicity Secretary of the party, Kola Ologbondiyan, said, “Yes, we will be holding our valedatory session on Wednesday, by God’s grace.”

A Rivers State High Court presided over by Justice O. Gbasam of the Degema Judicial Division vacation court, sitting in Port Harcourt, had on August 23, 2021, granted the order.

This was sequel to the consideration of an ex parte application in suit No: PHC/2183/CS/2021 filed by Ibeabuchi Alex, Dennis Amadi, Emmanuel Stephen and Umezirike Onucha against Uche Secondus (1st defendant) and the PDP (2nd defendant).

Barely 24 hours later, the Deputy National Chairman (South), Yomi Akinwonmi, issued a statement declaring himself as the acting national chairman in the absence of Secondus, citing Section 45 (2) of the PDP constitution.

However, a few hours after the statement, members of the party’s NWC under the leadership of Nazif stormed the PDP national secretariat with armed policemen and went straight into the NWC conference room for a meeting that started around 2pm.

Soon after the meeting, which lasted about 40 minutes, Nazif declared himself as acting chairman.

It took the intervention of the National Executive Committee of the party to restore order after recognizing Akinwonmi.