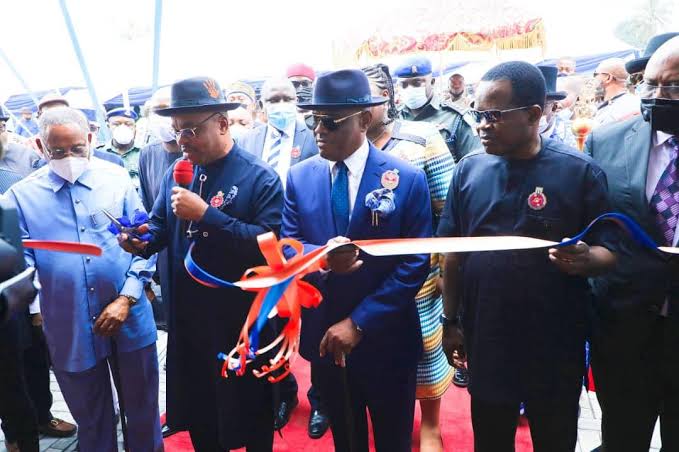 Governor of Rivers State, Nyesom Ezenwo Wike has alleged that President Muhammadu Buhari led All Progressives Congress, APC government has set Nigeria 20 years backwards in just six and half years of its misrule.

Wike also claimed that governors elected on the platform of APC are busy fighting over direct and indirect primary while he and his colleagues in Peoples Democratic Party are busy commissioning projects.

According to Wike, PDP governors have been preoccupied with the provision of dividend of democracy in their various states.

He urged Nigerians to be more careful in their choice of who they entrust with the responsibility of governing Nigeria, particularly members of the APC.

“The other people (APC) are only fighting themselves about direct primaries and indirect primaries. We (PDP) are busy about delivering dividends of democracy. You can see, the difference is clear.

“Your Excellency, I’m happy that you’re the one who have come, because you’ve invited me severally to Akwa Ibom State to commission projects. I’m happy and I want to say to everybody that PDP governors are doing very, very well.

“So, we must be careful of dealing with those who are not serious. A party that is not serious, that has set our country 20 years back. We must be very very careful.”

Governor Wike explained that it is wrong for most governments to forget to include the well-being of the most vulnerable in the society in their programmes.

The governor said such reluctance stem from the fact that they do consider it in their place to provide services and programmes for the protection of the less privileged.

“We do not think that we owe them that duty to also protect them. It is key that every government should take this as a special project.”

Speaking further, Governor Wike observed that most times when issues of violence is discussed, the focus is only on women as the only victims even when boys are often assaulted by women.

Governor Wike stated that the services at the Safe Home should also be available to males victims of violence and not women alone.

“So, Let us not think that it is only for women. It is also for young boys who are also assaulted so that they can also have some psychological debriefing.”

Performing the inauguration, Akwa Ibom State Governor, Udom Emmanuel noted that Governor Wike has blended ideas, creativity with available financial resources to achieve his landmark infrastructural development, while also catering to the needs of the vulnerable in the State.

He agreed with Governor Wike that governments get busy with infrastructural development, capital projects, thinking about the economic prosperity of their various states, and often forget the downtrodden and those who need help much more.

“Port Harcourt is one place that if I miss coming in six months, by the time I come back, I would have seen a lot of changes.

“When you want to know a State that is forward moving, forward looking, that has a lot to deliver, that has a governor that’s forward thinking, such a State, whenever you go there you don’t lack seeing construction sites.

“There is no single time you come to Rivers that you won’t see a construction site where people are working. And then, people will be talking of unemployment. Find out on one site and see how many youths are employed. How many people they are catering for.

Again, Governor Emmanuel spoke of Governor Wike as a party man who make them proud, and always occupied a space in the things that they do.

Governor Emmanuel urged the Federal Government to borrow a leaf from Rivers State and actually take the led through the Ministry of Humanitarian Affairs in order to match words with action, in providing similar facility and services across the country.

Providing the description of the project, the Commissioner for Social Welfare and Rehabilitation, Mrs. Inemi Aguma said there is no facility like the centre in Nigeria.

Mrs. Aguma pointed out that the centre is a one-stop facility that provides victims of domestic violence with access to justice, shelter, medical reference and prepares them for reintegration into the society.

According to her, the inauguration of the Rivers State Government Safe Home, as an unrivalled facility in the country, again demonstrates that the Wike’s administration provides for all sections of the society.

“The facility provides the much needed institutional and administrative support for the Rivers State Child Rights Law 2009 and the Violence Against Persons (Prohibition) Law 2020.

“A holistic Centre to provide infrastructure for children in need of protective custody and persons who have suffered violence especially domestic violence.

“Your Excellency, you have taken the lead in the provision of social welfare infrastructure in Nigeria as no State in the Federal Republic of Nigeria has a safety net of this magnitude, providing in one complex: justice, shelter, counselling, legal aid and aftercare.”

Why I Will Never Support Yoruba Nation – Obasanjo