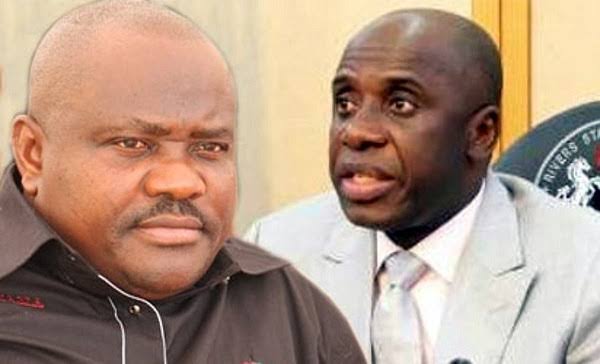 Prominent elders of the opposition People’s Democratic Party (PDP) have began mounting pressure on Rivers State governor, Ezenwo Nyesom Wike to gun for the party’s presidential ticket ahead of the 2023 general elections, The Authority can reveal.

This is coming on the heels of the calculation that the main opposition party may have succumbed to the mounting calls for power shift to the south after eight years of the Muhammadu Buhari presidency.

The PDP leaders reason that since President Buhari is favourably disposed to picking his successor from the south, it would be wrong for PDP, a party that championed zoning, to deny the south its presidential ticket.

A dependable presidency source told The Authority that President Buhari may have settled for his Minister of Transport and Wike’s predecessor, Hon. Chibuike Rotimi Amaechi, and that the APC presidential convenition may just be mere formality.

Amaechi, who is believed to be one of the few governors who bankrolled Buhari’s election in 2015, has been pencilled down for turbanning by the Daura emirate as “Dan Amanah Daura”. No other Minister in the Buhari cabinet has been handed such a high ranking title in the president’s home town.

Buhari had in a televised debate aired a few weeks ago stopped short of naming his annointed for the presidential seat, but quickly added that such a candidate could be assassinated.

A notable member of the PDP Board of Trustees who did not want to be named told The Authority that, aside the fact that they consider Wike to have Amaechi’s number- politically speaking – many if them believe Wike is the candidate to beat in 2023.

As Governor of Rivers State, Amaechi in 2014 moved to APC. Wike, who had earlier wrestled the PDP leadership in the state off Amaechi, contested the governorship election and trounced Amaechi’s candidate, Dr. Dakuku Peterside. In 2019, Amaechi’s attempt to stop Wike’s reelection suffered a more crushing defeat.

The PDP trustee remarked that should Amaechi succeed in emerging the APC candidate, Nigerians may be treated to a near repeat of what happened in 1999 when two Yoruba candidates – Olusegun Obasanjo of the PDP and Olu Falae of the AD/APP alliance, squared up at the presidential election.

In the upcoming case, he reasoned, “it would be an Ikwerre son, Rotimi Anaechi of the APC, running against another Ikwerre son, Nyesom Wike,” adding, “and you can bet that Wike would trounce Amaechi anyday.”

He noted, “As a council chairman, Wike was one of the most outstanding of the 774 chairmen. ALGON died after Wike left as President. Believing that Amaechi didn’t get a fair deal, he fought through the courts to make him governor, becoming Chief of Staff. Wike successfully chaired Amaechi’s reelection campaign.
He continued, “What is more, as the Minister of State for Education, he revolutionized our education system through the Almajiri system. Do you even know who the Education ministers are today? It is not in doubt that Wike is the best performing governor of this era. A man of courage, that is why we want him to become president and transform Nigeria the way he transformed Rivers State.”

Another trustee admitted that PDP learned a bitter lesson from the mistake President Goodluck Jonathan made in 2011 and in 2015 in failing to honour the party’s zoning arrangement. He said it would serve the best interest of PDP to zone the slot to the south and ensure that a formidable politician with aproven track record like Wike becomes president.

He noted, “In 1999, almost all parts of Nigeria agreed that for the continued corporate existence of Nigeria, it would be good to cede power to the Southwest, especially after the annullment of the June 12, 1993 election believed to have been won by Chief MKO Abiola.

“This was how Olusegun Obasanjo, who didn’t know how PDP was formed was given all the support to defeat our party’s founding father, Chief Alex Ekwueme at the PDP Jos convention,” observed the trustee.

He continued, “When Obasanjo was leaving in 2007, we put pressure on him to support the now late Umaru Musa Yar’Adua at the expense of better prepared Governors Peter Odili and Donald Duke,” stressing, “we are in the same wise bound by tradition to ensure that a southerner of substance emerges our party’s presidential candidate after eight disastrous years of Buhari.

“However, after the unfortunate death of Yar’Adua, instead of completing Yar’Adua’s tenure and supporting a northerner to pick the presidential ticket in 2011, Jonathan decided to run, rocking our zoning formula to it’s foundatios and causing us so many problems,” observed the trustee.

Wike, who is serving out his final term as governor has yet to make public his post-governorship political aspiration.

There have been speculations that he might be interested in pairing with a presidential candidate from the north.

The trustee told The Authority that some of his colleagues have begun reaching out to Wike to mentally prepare him for the political task ahead. The party elders supporting Wike, he said, are encouraged by the realization that none of the two remaining Southeast governors elected on the PDP platform (Enugu and Abia) is keen on contesting the presidency.

For now, he said, only former Senate President Anyim Pius Anyim is the sole presidential aspirant from the south east showing “sufficient seriousness.”

The challenge before Anyim, who served as Secretary to the Government of the Federation (SGF), is getting the support of PDP-elected governors who wield considerable influence in the party, the chieftain noted.

He explained “Pius Anyim appears to be the only Igbo man interested in Aso Rock. Governors Ugwuanyi and Ikpeazu seem to be more interested in going to the Senate. This leaves us with Governors Wike, Udom Emmanuel of Akwa Ibom, Gabriel Obaseki of Edo, and Ifeanyi Okowa of Delta State. And with due respect, among the lot, Wike is the governor with the best track record in terms of achievements, name, recognition, membership of the party, and the heart to fight to the end.”

The party elders recalled how PDP had supported Wike in 2015, even when a fellow Ikwerre- Rotimi Amaechi- was completing his tenure as governor, saying the party took the “exceptional decision” because, according to him, “Wike was the only aspirant who had the capacity to fight an incumbent Governor, Amaechi-,” adding, “thankfully, he proved his mettle.”

He added that by being Ikwerre, which he claimed many Nigerians consider as an Igbo ethnic group, a Wike candidacy would appeal to the Igbo and minorities of the South-south region.

“We would have been able to somehow kill two birds with one stone,” noted the trustee.

Another elder reminded The Authority that aside what he described as Wike’s “Igboness”, the Rivers governor was one of the very few governors who stuck out his neck to rescue PDP in the thick of the Senator Modu Sherrif-induced leadership crisis that rocked the party.

“But for the untiring efforts of the likes of Wike in the heat of that crisis, PDP would most certainly have gone the way of other mushroom parties. We are not saying we want to pay him back with the party ticket, but there’s nothing wrong in supporting a man who gave his all to support the party” reasoned the trustee.

He said most Nigerians are happy with the way Wike has been using the courts to challenge the status quo of our constitutional federalism, saying the moves have shown the Rivers governor to be a man of courage.

“One of the failings of the Jonathan and Buhari governments is that they lacked the courage to tackle our challenges. Look at Buhari. Lack of courage is the reason he has been unable to implement any policy thrust from deregulation of the petroleum sector, to the SIM- NIM issue, from indecision to fight bandits and terrorists, to the failure to bring corrupt officials to book.

“You can accuse Wike of brashness or of taking radical actions. One thing you can’t accuse him of is indecision. It is the kind of energy and Wike has that drives him.yo achieve results. These are unusual times and this is exactly the kind of courageous man Nigeria needs at this time of our political and economic crossraods,” he remarked.

Efforts to get Wike’s spokesman Kelvin Ebiri comment on the issues raised on his boss failed to yield results.

Related Topics:2023: As Buhari Zeroes in on Amaechi…
Up Next

2023: Buhari Will Give Us Guidance On Zoning, Says Gov Abiodun