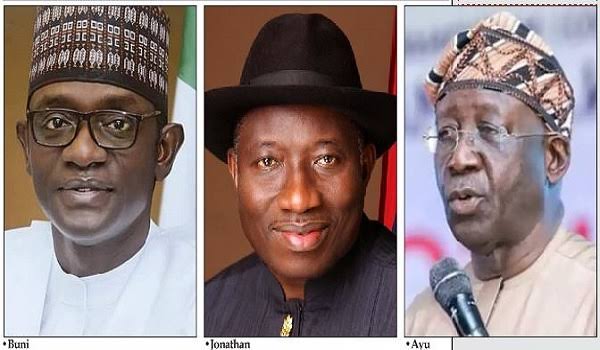 Inspite of overtures by some Northern governors of the All Progressives Congress (APC) to ex-President Goodluck Jonathan to fly the flag of the party in next year’s election, there is no commitment yet from President Muhammadu Buhari or key party leaders on the matter, The Nation can now report.

It was learnt that the ex-President is still consulting on whether or not to contest or remain a statesman.

Jonathan is believed to have lost the backing of some Peoples Democratic Party (PDP) governors, especially his anointed choice in one of the South-South states.

The particular governor is said to have ruled out the prospect of another Jonathan presidency under any guise.

According to an investigation conducted by our correspondent, the cold shoulder from the PDP governors was capitalised upon by some APC Northern governors to woo Jonathan.

The APC governors opted for Jonathan because he is only entitled to one term, after which power would return to the North.

It was gathered that Jonathan’s candidacy is not acceptable to more than three APC governors.

A top source, who spoke in confidence with our correspondent, said: “Some Northern governors have reached out to Jonathan on 2023 presidency and the need to be APC flag bearer.

“The permutations of the governors border on fostering a North and South-South alliance with some elements in the South-West in 2023.

“The governors believe that with one term for Jonathan from 2023, the presidency can return to the North in 2027.

“But many APC governors are not buying into the Jonathan project at all. They claimed that if Jonathan secures APC presidential ticket, there would be no justification for the 2015 ouster of PDP from power by the ruling party.”

Findings from some close associates of Jonathan confirmed that he is interested in the presidency but he wants the ticket on a platter of gold.

The ex-President is said to have confided in some members of his former cabinet.

A former Minister said: “So far from interactions with him, the ex-President appears to be interested but he is not convinced of the genuineness of the overtures.

“Some APC governors came to beg him to run for the 2023 presidency on the platform of the party.

“I think the affected APC governors are aware of the fact that Jonathan has lost grounds in PDP. They see him as a big catch to renew the aged alliance between the North and the South-South as was the case during the Second Republic.

“The talks are still ongoing. Jonathan has been awaiting a firm commitment from President Muhammadu Buhari and key APC leaders but this is not forthcoming. His terms are to join APC and get the presidential nomination.

“Buhari, who said he won’t disclose his preferred candidate for 2023 presidential race, sticks to due process and he has not given any green light to Jonathan.

“Many APC stalwarts are also not excited by likely defection of Jonathan from PDP to their party. Apart from his gentle disposition and democratic credentials, they don’t rate him as a political asset.

“But Jonathan’s aspiration has received the blessing of two former presidents/heads of state.”

Investigation revealed that Jonathan has been boxed into a corner in PDP by some governors and presidential aspirants.

A party source added: “The truth is that Jonathan is not finding it easy in PDP. The PDP governors hold the party’s structure and they are not looking towards Jonathan.

“In fact, Jonathan is no longer enjoying the confidence of PDP governors. He seems to have fallen out with a South-South governor he installed in 2015. The governor has ruled out Jonathan from 2023 presidential race.

“Ex-Vice President Atiku Abubakar, whom Jonathan defeated at the presidential primary election in the past, is stronger now than the ex-President.

“The option left for the ex-President is to take the risk and plunge himself into the race to try his luck.”

Related Topics:2023: Jonathan yet to get backing from BuhariAPC leaders
Up Next

Tinubu Asked To Declare For 2023 Presidency