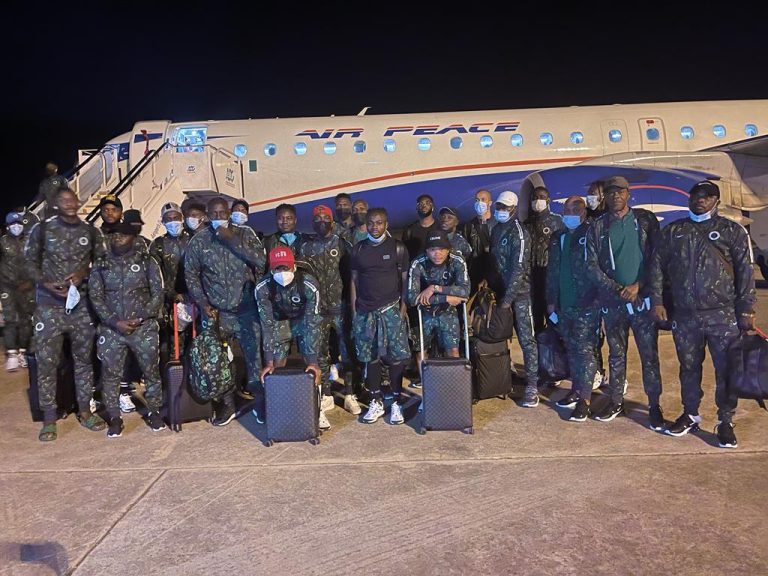 Nigerian National men football team, the Super Eagles have arrived in Cameroon ahead of the upcoming Africa Cup of Nations, AFCON, tournament.

www.tracknews.ng understands that the 2021 AFCON tournament will kick off on Sunday evening, January 9 with Cameroon playing the opening match against Burkina Faso.

The Nigerian squad and officials are said to have arrived in Garoua, Cameroon, on a chartered flight in the early hours of Thursday.

Super Eagles would be playing their first match against Egypt on Tuesday, January 11 at the Roumde Adjia stadium, Garoua.

Watch the video of the arrival of the Nigerian National team and officials below:

Meanwhile, Super Eagles captain, Ahmed Musa could not travel with the Eagles to Cameroon, www.tracknews.ng understands.

It was confirmed that the 29-year-old player missed the Super Eagles’ last training session on Wednesday, December 5, after receiving the sad news that his relative died.

The National Team management sympathized with the Fatih Karagumruk of Turkey striker and subsequently granted him permission to leave the team’s camp to be with family members.

Musa is, however, expected to join his teammates in Cameroon ahead of Nigeria’s first game of the competition against Egypt on January 11.

www.tracknews.ng had reported earlier that the shirt number for the players were made public on Wednesday by the Confederation of African Football (CAF).