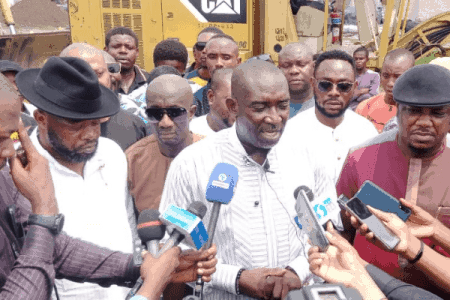 The Chairman of Eleme Local Government Area, Obarilomate Ollor has expressed total disappointment with the Federal Government over her poor handling of the Eleme East West road and has given till the end of February 2022 for the FG to commence construction work on the road or face complete shutdown of activities on the federal highway.

Ollor who stated this during a meeting with critical stakeholders of the Transportation sector frowned at the Presidency’s negligence and insensitivity to the sufferings of road users which has heightened the plight of those working and living in Eleme Local Government Area.

“I have always maintained that the Federal Government is irresponsible and not sensitive to the plight of our people. Judging by recent happenings with regards to the negligence of government to the sufferings of road users in this part of the world, my stance is vindicated.

“Again, like I said before the Youths vacated the road in August, the protest was only suspended and not ended, therefore let it be noted today that we are giving the Federal Government from today January 12, 2022 to February 28, 2022 to commence full construction work on the road as captured in the national budget or they will suffer a complete shutdown of the road.

“We cannot watch our people suffer continuously as a result of the insincerity and irresponsibility of the Federal Government and its agencies. It is very clear that as we get close to the electioneering period, the Federal Government would shift attention from infrastructural development and focus on campaigns, therefore they have to fix the road as they promised before election or nobody will have access to that road”, Ollor insisted.

On the directive by Governor Nyesom Wike on January 01, 2022 ordering the removal of all trucks and articulate vehicles parked along major roads and streets for more than 48hours or be impounded, Ollor briefed all critical stakeholders of the Transport sector of the modalities he has put in place including the setting up of a Task force to enforce the Governor’s directive.

According to him, the situation in Eleme is worst as heavy duty users abuse their privileges of using the roads thus making life difficult for other road users. He maintained that there is a serious need for sanity on the highways to ensure ease of access in and out of Eleme.

“The road is currently in its most deplorable state and the inability to use the road with wisdom will keep us trapped for hours in our attempt to navigate the City of Port Harcourt and other areas of the State”.

On security, Ollor noted that Eleme is no longer a safe haven for criminals and efforts are in top gear to ensure that the successes so far achieved on this front is sustained.

He insisted that everyone has the right to live freely and in peace but whoever chooses to make life difficult for others will have themselves to blame when government clamps down on them maintaining that it is the resolve of his administration to make Eleme habitable for everyone.

Ollor also took the opportunity to thank Governor Wike for his magnanimity in ensuring adequate empowerment and strengthening of the security architecture within the State which his administration has leveraged on to enjoy the peace in Eleme today.

“I have continue to maintain that my administration is poised to making Eleme peaceful and habitable for every willing person to live in and do business safely and that must be achieved against all odds by the special grace of God. It is important to note that this is the first time for over ten years that Eleme celebrated Christmas without experiencing any crisis or security hitches with the relative peace dating back to October 2021”

Bandits Are Being Released Without Charges – Matawalle Raises Alarm