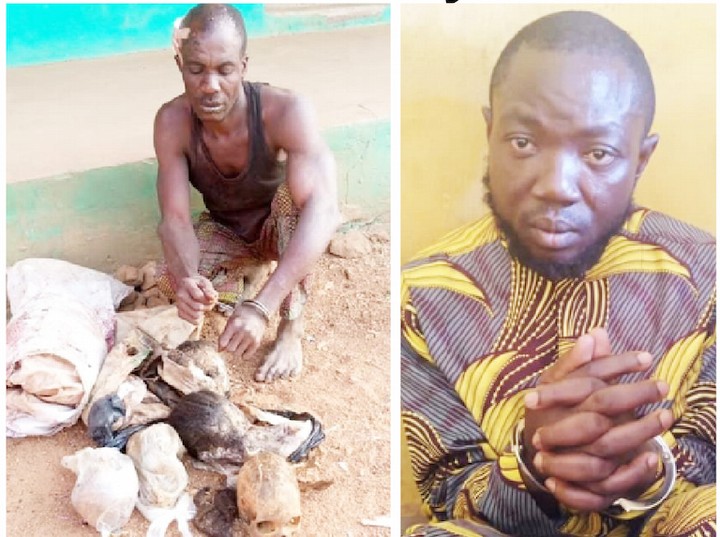 An Alfa, Yunusa Atikoko, and his accomplice, Wasiu Ajikanle who were caught exhuming 16 skulls and body parts from a burial ground at Kilometer 1, Moniya-Iseyin road, Iseyin have been arrested on Wednesday.

According to Daily Trust, the suspects were apprehended along Alamole by Odua People’s Congress (OPC) and Yoruba Revolutionary Movement (YOREM) in Oyo State.

A witness told the publication that the suspects have been handed to the police for further questioning.

There have also been reports of missing bodies at the cemetery with the authorities having no explanation for the disappearance.

When the Police Public Relations Officer, Adewale Osifeso was contacted he said the necessary update would be provided soon.

It was gathered that the hoodlums who used bombs in attacking the police division also freed detainees.

The gunmen in their large numbers also set part of the police station ablaze with explosive devices.

The explosives destroyed the administrative office, the Divisional Police Officer’s office, and the reception desk, The Nation reports.

Speaking on the attack, Imo Police Command spokesman, CSP Michael Abattam, said he was yet to be briefed.

It was learnt that some of the detainees have been rearrested by a local vigilante group. Read more

Related Topics:Alfa Caught With 16 Human SkullsOther Body Parts In Oyo State
Up Next