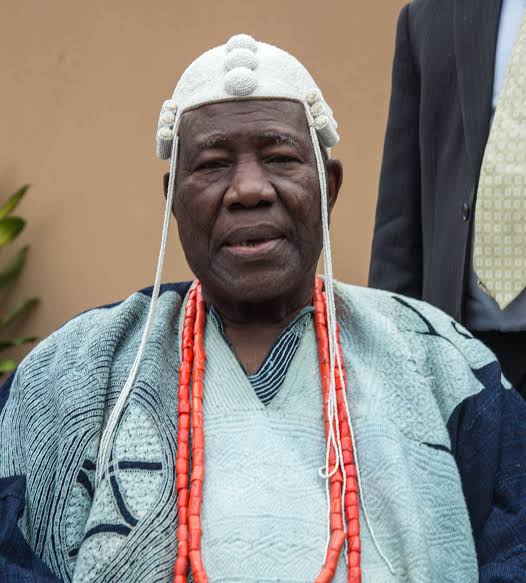 President Muhammadu Buhari and a former Lagos state governor, Bola Tinubu, have expressed sadness over the death of the Olubadan of Ibadan, Oba Saliu Adetunji.

www.tracknews.ng had earlier reported that Oba Adetunji died on Sunday at the University College Hospital (UCH) Ibadan, after a brief illness.

The late traditional ruler had since been buried on Sunday evening at his Popoyemoja palace according to Islamic rites.

Reacting to the monarch’s death, President Buhari said the demise of Oba Adetunji understandably leaves a huge void to fill and he would be missed sorely.

Buhari in a statement by his Spokesman, Femi Adesina, commiserated with the family of the Olubadan of Ibadan, the good people of Ibadan and Ibadan indigenes over the death of the late monarch.

The Nigerian leader described the late traditional ruler as a visionary and compassionate leader, who used his position to advance the progress of his people.

President Buhari urged Nigerians to imbibe the virtues Oba Adetunji cherished so much and work for the unity of the country.

He prayed to God to grant the soul of the monarch eternal rest and comfort his family, associates, friends and subjects he left behind.

Also reacting, the National Leader of the All Progressives Congress (APC), Bola Tinubu, expressed sadness over the demise of Oba Adetunji.

In a statement from his media office, Tinubu said the demise of the late monarch has robbed the country of his wisdom and wise counselling.

He described the late monarch as humble, humane, mature, calm and decent, praying to God to grant the monarch eternal rest.

“I received the news of the transition of the highly-revered royal father, the Olubadan of Ibadanland, Oba Adetunji Saliu with sadness. Kabiyesi passed on at the ripe age of 93, which we are extremely grateful to God for. But this demise has robbed us of his wisdom and wise counselling,” he said.

Related Topics:BuhariTinubu Mourn Olubadan Of Ibadan
Up Next

Please Pray For Me And My Family – Pastor Adeboye Begs Nigerians