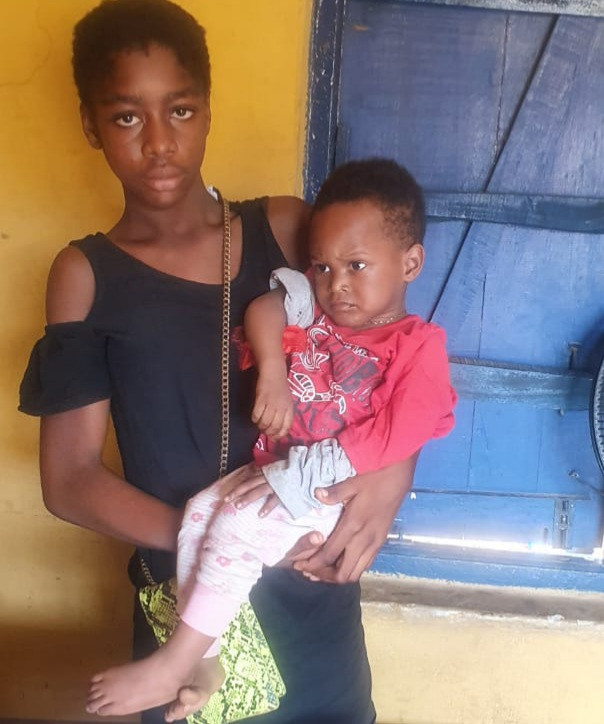 According to him, the suspect attended church service with his wife and their two children. His wife however received a call from one of her customers and she left the suspect and her children in church, instructing Favour to ensure they all return to her shop after church. Favour however fled with their son.

Giving an update on Tuesday morning, January 4, the spokesperson of the Ogun state police command, DSP Abimbola Oyeyemi, said the suspect was arrested following a complaint lodged at Sagamu divisional headquarters by one Victoria Nwafor, who reported that she saw a 14 year old girl on the 22nd of December 2021, with a very sick two year old boy in Yaba Lagos.

She stated further that the little girl was begging for alms under the pretence that the small boy is her younger brother and that their parents died in an accident in December 2020.

Out of compassion, the woman took both of them to her house in Sagamu in order to take care of the little boy’s deteriorating health condition.

But immediately the boy fully recovered, the suspect wanted to single-handedly take the boy to Imo state. This aroused the woman’s suspicion, hence her report.

Upon the report, the Dpo Sagamu division, CSP okiki Agunbiade detailed his detectives to go and bring the girl and the little boy.

On interrogation, the girl confessed that she was a maid to the mother of the little boy, and that she left with the boy since on the 19th of December 2021, with the intention of taking the boy to Amraku Umorsu in Isiala/Mberna local government area of Imo state.

She stated further that, she took the baby from the church during Sunday school period, and since the Sunday school teacher knows her with the baby’s mother, she had no problem releasing the baby to her.

She explained further that she decided to beg for alms in order to raise transport fare to Imo state. ” Oyeyemi said

The police spokesperson added that the Commissioner of police CP Lanre Bankole ordered that the baby’s parents be contacted, while the case be forwarded to Lagos state command whose jurisdiction the crime was actually committed.

Related Topics:BURSTED! Househelp Who Fled With Her Madam’s Son In Lagos Arrested In Ogun
Up Next